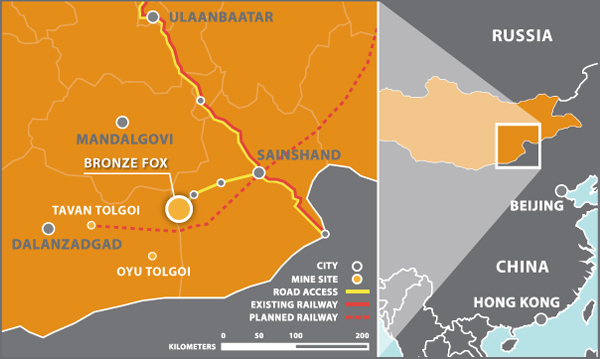 Kincora Copper Limited announced that it has entered into a letter of intent with Forbes & Manhattan Inc a Canadian merchant bank and Temujin Mining Corp a closely held private company, whereby the Company would acquire from Temujin all of the issued and outstanding shares of Golden Grouse LLC a Mongolian company which holds certain mineral exploration licenses adjoining the Company’s Bronze Fox project in Mongolia referred to as the Manlai Licences.

As consideration for the shares of Golden Grouse, the Company is to issue to Temujin approximately 35,000,000 shares of the Company, which shares are intended to be dividended out by Temujin to its shareholders concurrent with the closing of the Acquisition.

The Manlai Licences are located immediately to the western and northern boundaries of the Company’s Buyant License 15000X; in an area of known porphyry copper deposits. The Bronze Fox Intrusive Complex copper-gold resources owned by Kincora and Tourmaline Hills Intrusive Complex exploration target which is the subject of the proposed Acquisition are both located just over 100 kilometres to the north north east of the giant copper-gold deposit Oyu Tolgoi, within the same geological group.

The Manlai Licences lie on an east west trending splay off the Zuunbayan fault zone, which is also thought to control the location of porphyry style copper and gold mineralization at Suvarga, Tsagaan Suvarga, Shuteen and Olut Ulaan and possibly Kharmagtai. This equates to a belt with a 150 km strike length.

Porphyry style alteration at BFIC and THIC and associated mineralization has a typical pro grade high temperate assemble with biotite and magnetite and quartz sheet veins and stockwork containing varying percentages of chalcopyrite. A direct relationship does exist between elevated copper and gold grades. The THIC has significant quartz and tourmaline veining and brecciation in the southern margins of the intrusive complex. The southern anomaly is more likely to be associated with an epithermal target. This target was not previously drilled or trenched by Ivanhoe.

Mr Igor Kovarsky president and CEO of the Company said that “This transaction suits the Company’s strategic goals and will add a significant tenement to the Company’s prospect pool of promising targets. On closing of the Acquisition, our tenement will encompass two of Ivanhoe’s former high priority prospects, the Bronze Fox and Tourmaline Hills.”

Concurrent with the Acquisition it is intended that F & M, together with certain of its affiliates, associates and other investors, will subscribe for units of the Company (the “Units”) for proceeds of up to USD 2,800,000 and that certain insiders and other investors may also subscribe for Units with proceeds to the Company of up to a further USD 3,200,000 for combined proceeds of up to USD 6,000,000 (the “Offering”).