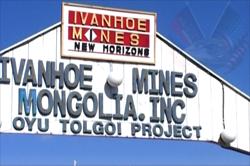 Ivanhoe Mines said that it will scrap its shareholder rights plan, clearing the way for its single largest shareholder, Rio Tinto to take over what could be one of the world’s largest copper-gold mines.

Ivanhoe is the owner of Mongolia’s vast Oyu Tolgoi project.

A shareholder rights plan, or poison pill, is a defence tactic used by a company’s board of directors to fight against unwanted takeovers and makes it more expensive to acquire the target company.

Cancelling the plan will require approval of shareholders at the company’s annual meeting on May 11. The move came as an agreement limiting Rio Tinto’s holding at 49% expired.

Ivanhoe’s rights plan, backed by shareholders in 2010 and due to expire next year, was dealt a fatal blow in December when a court ruled it could not be used to dilute Rio’s stake.

The ruling recommended Ivanhoe scrap the provision, which would have triggered a massive rights issue in the event of a bid.

Industry insiders believe that Rio would be unlikely to jump into an aggressive move to take over Oyu Tolgoi or Ivanhoe or get into a battle with Ivanhoe’s CEO, Robert Friedland.