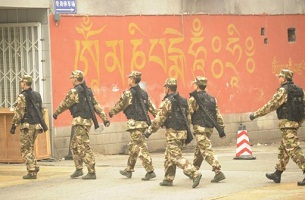 Authorities in Beijing have ramped up security across Tibetan areas—from Lhasa, capital of the Tibetan Autonomous Region, to the Amdo and Kham regions—following deadly protests last week, according to sources.

As Tibetans grieved over the deaths of protesters gunned down by Chinese security troops in the Kardze (Ganzi) and Ngaba (Aba) Tibetan Autonomous Prefectures in Sichuan province, Chinese security forces clamped down on activities in Tibetan areas.

An unknown number of Tibetans have also been detained over the protests as the Tibetan parliament-in-exile in India said it would hold a series of campaigns to express “solidarity” with the Tibetans inside Tibet and “garner the international community’s support to press the Chinese government” to defuse the escalating tensions.

“The presence of security forces in Serthar [in Chinese, Seda] is intense. The area is encircled by Chinese police and armed forces and Tibetan movements are restricted,” a source in the area told RFA at the weekend.

“The body of [one protester] who was shot in Serthar was not given to the Tibetan monastery, not even to the [influential] Serthar Buddhist Institute, and instead was taken by Chinese authorities to Chengdu and cremated as per Chinese choosing,” the source said.

Serthar was among three counties in Sichuan province where Tibetans protested against Chinese rule last week and where rights and exile groups believe at least six were killed and 60 injured, some critically. The other counties were Draggo (in Chinese, Luhuo) and Dzamthang (in Chinese, Rangtang).

“The presence of armed Chinese force is significantly increased … in Draggo and Serthar,” another source said.

“Additional troops were moved from the [Sichuan capital] Chengdu [security] command region. Those additional troops are reported to be from Deyang and Mianyang Military Camps.”

Telephone links to the protest areas have been mostly cut, some sources said.

The Dzamthang area is also under lockdown and surrounded by troops of armed police, according to monks in exile with contacts in the area.

Kalsang, an MP in the Tibetan parliament-in-exile in Dharamsala, India, said on Friday that the strictest military controls were being imposed in Serthar, Kardze, and Draggo.

China’s ruling Communist Party has already deployed “working groups” in every village and monastery in Kardze and Ngaba prefectures, according to Jampel Monlam, assistant director of the Tibetan Center for Human Rights and Democracy in Dharamsala.

Residents in Lhasa said the capital was tense, with security forces deployed across the city and going around searching homes, advocacy group Free Tibet said.

One Lhasa resident told the group about Lhasa’s Barkhor Street, which surrounds Jokhang Temple, Tibet’s holiest and most ancient temple:

“How horrible it is. I dare not look around in a casual manner, dare not move around freely. Armed personnel are everywhere, police are on every corner.”

In one Lhasa district, one family described to Free Tibet how their homes were searched for no apparent reason.

Security personnel warned the family not to discuss politics with their relatives during telephone calls.

“Chinese authorities are using intimidation and surveillance of ordinary Tibetans to instill a culture of fear and stop people from speaking out,” said Free Tibet Director Stephanie Brigden.

Penpa Tsering, speaker of the Tibetan exile parliament, said on Sunday that a four-member parliamentary delegation has headed to New Delhi to “seek support” from UN officials and foreign embassies to help resolve the crisis.

“We call upon the governments around the world to not only express your concern but also seek your intervention in de-escalating the prevailing dangerous situation inside Tibet and help find a lasting solution to the issue of Tibet for a mutually beneficial agreement through dialogue,” Tsering said in the memorandum to be submitted to the embassies.

“We are also sending an open letter to Chinese President Hu Jintao regarding the critical situation in Tibet to seek a lasting solution to the issue of Tibet,” the speaker said.

The Tibetan government-in-exile, the Central Tibetan Administration, has called for a “global solidarity vigil” on Feb. 8 to highlight the latest crisis.