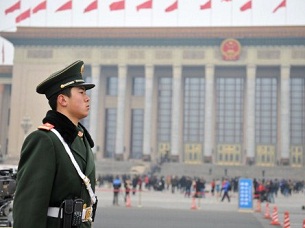 Authorities in Beijing have rounded up around 100 petitioners in recent days after they traveled to air grievances to China’s parliament, Shanghai-based activists said.

The move came as delegates to the National People’s Congress (NPC) meeting this week approved a boost in spending on domestic security, signaling that current “stability maintenance” security crackdowns ahead of a key leadership transition later this year could become permanent.

Among those detained were Shanghai petitioners Wang Zhihua, who had traveled to Beijing with around six other people to petition the NPC’s secretariat, and Yan Meiying.

“We were detained when we got to Hutong No. 37 to the west of the Great Hall of the People,” Yan said in an interview on Tuesday. “We were going there to deliver a letter, and they called the local police to detain us.”

She said the group was taken to Jiujingzhuang, an unofficial “black jail” detention center where petitioners are routinely held before being escorted back to their hometowns by their own local officials.

“We were taken to Jiujingzhuang where we were locked up by officials from our representative office in Beijing,” Yan said. “Now they have forced us outside and they won’t let us rent or borrow a room.”

Police also detained a group of eight petitioners including Yu Yiming, Li Weiqing and Zhou Miao near the NPC building, and took their petitioning letters, promising they would be delivered.

“We didn’t get in,” Zhou Miao said on Tuesday. “We got to a place inside police lines at Xijiaomin Alley, where we were stopped by a large number of police and armed police.”

“We told them we had two motions to table at the NPC, and they put us in the police vehicle…and then took us to Jiujingzhuang.”

She said police told them their petitioning was illegal. “They are forcing us into this so-called illegal petitioning,” Yan said. “When we do normal petitioning, no one pays any attention to us.”

Shanghai petitioner Chang Xiong said he was also inside a “holding center” in Beijing along with 20 fellow activists.

“We have been here two days,” Chang said. “There are more than 20 others here with me.”

And a 70-year-old petitioner, Zhang Shouzhen, said: “Those bandits took all of our possessions and then started barking orders at us, treating us like criminals.”

Activist Wang Kouma said his group had avoided detention only by staging their protest miles from the Great Hall of the People.

“During the NPC parliamentary session, there are police stationed every couple of paces,” Wang said. “There are police, armed police and plainclothes police, as well as security volunteers in red armbands, wherever you look.”

“There is no way you can get anywhere near the place,” he said.

Wang said he and his group of around 14 people had set up a banner at the old summer palace in a northern suburb of the city, which read: “Petitioners in Beijing table an NPC motion calling for the legal and thorough-going resolution of petitioners’ demands.”

China announced on Monday a rise of 11.5 percent in its domestic security budget, to 701 billion yuan (U.S.$111 billion), with premier Wen Jiabao pledging a full modernization and expansion of the country’s main riot-quelling force, the People’s Armed Police.

The spending increase comes months ahead of a leadership transition later this year that has kindled fear of instability. The administration of Premier Wen Jiabao and President Hu Jintao will hand over the reins to a new generation of leaders in the fall.

“The cost of maintaining public security is greater than the defense of the country,” Liu said. “This shows that our society is actually very unstable, if so much has to be spent on maintaining stability.”

“There is still not enough spending on social security, health insurance or education.”

He warned that to spend money on suppressing social unrest would be untenable in the long term, however.

U.S.-based academic Cheng Xiaonong, who formerly headed an economic reform think tank under the aegis of the NPC, said the armed police force was getting close to the size of the People’s Liberation Army’s combat-ready troops.

“Actually the Communist Party knows very well that the fact that people are unhappy over problems to do with their welfare and livelihood isn’t the only problem it faces,” Cheng said.

“There is also very strong popular anger at the current system and at political corruption.”

A survey by the Party-backed think tank, the China Academy of Social Sciences, showed that there were more than 90,000 “mass incidents” across the country during the course of 2006. Since then, the government has been reluctant to make such figures public.

Reported by Jiang Pei and He Ping for RFA’s Mandarin service. Translated and written in English by Luisetta Mudie.