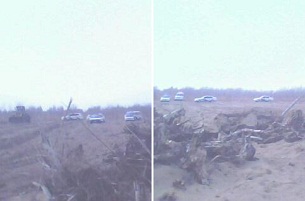 “I narrowly escaped arrest,” said one protester from the village, identified by a single name, Chenfuulong. “They raided my home and confiscated my motorcycle,” he said.

He added: “Police violently beat up the protesters with batons; some were bleeding, some were beaten down on the ground; women were pulled by their hair and thrown into police vehicles.”

“Over 80 heavily armed police with more than 30 police vehicles dispatched from the Naiman Banner Public Security Bureau came to Tulee Gachaa and brutally beat up the local Mongolians who were attempting to stop a Xinglonggao Forestry bulldozer from turning over their farmland,” the group’s statement said.

A second witness said that many young children had been left unattended after seeing their parents taken away by police.

“Shuanzuur and Gowaa are husband and wife, and their five year old daughter was left crying at home with no one’s care,” the eyewitness said, adding that tensions were still running high in the area.

“Police cars are still patrolling the village and further crackdowns are expected,” he said.

The local Mongolians were demonstrating against the expropriation of their lands by a government backed Chinese-run company called Xinglonggao Forestry, SMHRIC said in a statement Monday.

The farmers were protesting over 60,000 mu (10,000 acre) plot of farmland that was taken over by the company several years ago, but which now apparently lay neglected, the group quoted protest organizer Chenfuulong as saying.

“Since last year, they stopped managing the forestry,” he said. “It should be returned to the legitimate owners of the land, the Mongolians of Tulee Gachaa.”

“Now they are trying to continue to occupy our land,” he said.

He said the protests came after a series of attempts to petition higher levels of government in nearby Tongliao city and Beijing had failed.

“Nothing has been addressed,” Chenfuulong said. “Our banner government sent security personnel to Beijing and brought us back to Naiman Banner. The banner governor met with us not to address the problem but to threaten us with arrest and imprisonment,” he said.

“Now they are beating and arresting us.”

In May 2011, the killing of a herdsman in a standoff with mining company employees triggered large-scale protests by herders and students across Inner Mongolia, putting a spotlight on ethnic tensions in the region.

In the wake of the protests, China poured large numbers of troops into the region and enforced a security lock-in at schools, universities, and government institutions.

Official documents described the protests by thousands of ethnic Mongols in the region’s major cities as the work of “external hostile forces,” although it made no mention of where those forces originated.

Mongols are a recognized ethnic minority in China and number around 6 million, according to government statistics.

In China, all land is ultimately owned by the state, but is allocated to communities under collective contract and through the household responsibility system that replaced state-run farms and communes under Deng.

Land acquisition for development, often resulting in lucrative property deals for local officials, sparks thousands of protests by local communities across China every month, many of which escalate into clashes with police.