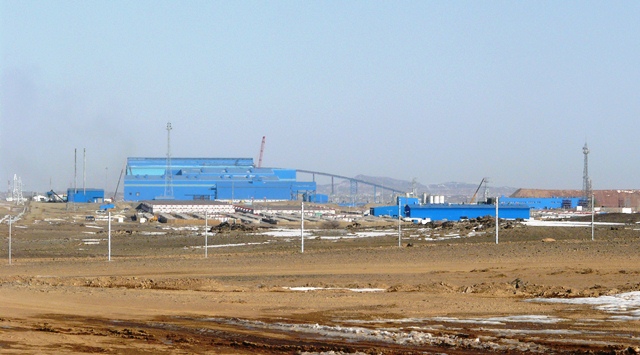 Financing to expand the $13 billion Oyu Tolgoi copper mine in Mongolia is likely to be locked in by the end of the year, said an executive with the mine’s operator Rio Tinto .

Investment in Oyu Tolgoi helped drive growth in the central Asian country to 16.7 percent in the first quarter of 2012 and may already account for more than a third of Mongolia’s economy.

“We are currently in the process of working with banks, and have been for a couple of years, to put in place the world’s largest ever project finance raising for the industry and hopefully in the next six months we will conclude that,” Cameron McRae, Mongolia country manager for Rio Tinto and chief executive of Oyu Tolgoi LLC, said in an interview on Friday.

Oyu Tolgoi began development in 2009 after a landmark investment agreement gave 66 percent of the project to Canada’s Ivanhoe Mines. Rio Tinto now has a majority stake in Ivanhoe and has full operational control over the mine.

The project has already cost $7 billion in capital investment, and Ivanhoe in March estimated the second phase may cost more than $5 billion, heaping pressure on the Anglo-Australian mining giant.

The project is on track to begin producing ore by the end of August, six months ahead of an original schedule, and it will go into commercial operation next year, McRae said at his office in Ulan Bator.

But in a remote desert region bereft of infrastructure, much still depends on securing electricity from neighbouring China.

McRae said he expected commercial agreements with power generators in the Chinese region of Inner Mongolia to be completed on time but conceded that geopolitical concerns between China and Mongolia had slowed the process.

Rio Tinto expects to be given the go-ahead to build its own onsite power plant within the next few weeks.

In an ideal world, it should have started sooner, McRae said, but it would have pushed capital expenditure up by another $1 billion and put further pressure on the project’s strained foreign shareholders.

“The initial $7 billion was all being funded by foreign shareholders and we haven’t gone to external debt. I think the capacity of the shareholders was pretty well maxed out.”

Investment in Oyu Tolgoi could already make up 35 percent of the country’s total economy, McRae said.

But the role played by foreign investors in Mongolia’s burgeoning mining sector has been subject to criticism, especially ahead of next week’s parliamentary elections.

Last year, nationalist backbenchers called on the government to demand an increased stake in Oyu Tolgoi. Investors are also concerned about the popularity of former President Nambar Enkhbayar, who has campaigned for the 2009 deal to be renegotiated.

In May, nationalist backbenchers passed a new law that would subject foreign investments in “strategic” sectors to greater regulatory oversight, a move thought to have been designed to prevent Ivanhoe from selling a majority stake in its subsidiary SouthGobi Resources to Chinese metals giant Chinalco.

“The law is not a bad thing,” said McRae. “But what is important for Mongolia is how they finalise it and what regulations are in place so it becomes a good law that attracts foreign investment and enables domestic investment to occur.”

“The interesting point in this election is that there are quite a lot of politicians and partners that are out there putting the pro-foreign investment view forward,” he said.