﻿ www.unuudur.com » Trouble in Kyrgyzstan — Centerra’s Kumtor gold mine is under political attack 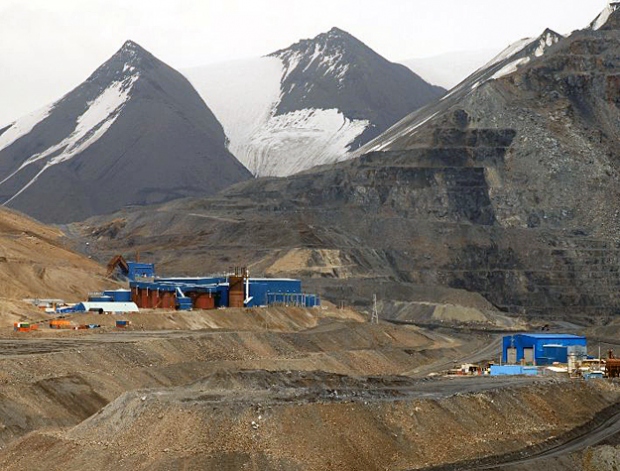 Few Canadians have heard of Kyrgyzstan, and fewer still could find it on a map. But the landlocked central Asian republic is of particular interest to one Canadian company, Centerra Gold (TSX:CG). Its Kumtor Mine, located high (over 4,000 metres) in the Tian Shan Mountains, has produced more than 8.4 million ounces of gold since 1997. On June 18, a 300-page report by a parliamentary commission accused Centerra of stealing gold and devastating the environment. Centerra shares have fallen by more than half since then.

According to VP Investor Relations John Pearson, the commission’s claims are “unfounded.” He explains, “We’ve had a number of international independent companies that have audited the site, and all those independent audits have come back and said the site operates and meets and exceeds all the Kyrgyz standards from an environmental standpoint. It meets the international standards which are even more stringent than the Kyrgyz standards. So we certainly feel that the parliamentary report’s findings on environmental issues are without merit.”

On June 22, the Kyrgyz Parliament voted narrowly against nationalizing Kumtor. Instead, it commissioned a report, due October 1, which will likely call for a revision of the document that governs Kumtor’s relationship with Kyrgyzstan, the New Agreements of 2009. While Centerra owns Kumtor and its output completely, the 2009 agreement gives Kyrgyzstan one-third ownership of Centerra. Its Parliament is apparently not satisfied with this.

After the votes, Centerra President and CEO Ian Atkinson said that the Kyrgyz Parliament resolution has no legal standing and reminded the government that it “undertook a number of legal obligations and binding commitments in the New Agreements.” According to Pearson, “We feel it’s a very solid agreement, done openly and transparently. The agreement was reviewed by six different parliamentary committees, and it went to the full Parliament and was ratified by the full Parliament. Then it was signed into law by the President and tested in the Constitutional Courts to see if it met [constitutional muster], and it did.”

According to the Telegraph, “The Kumtor mine accounts for more than half of [Kyrgyzstan's] industrial output and generates about an eighth of its national income.” To give an idea of just how important Kumtor is to the country, Centerra’s announcement May 15 of reduced 2012 gold production guidance (from 642,000 ounces to 390,000 ounces) led to this pronouncement from Prime Minister Omurbek Babanov, “Kyrgyzstan’s annual GDP growth will fall to 1.8% from the original target of 7.5%.” According to Reuters, “Hard hit by the slump in Kumtor’s output, Kyrgyzstan’s GDP shrank by 6.4% in January-May of this year compared with the same period of 2011, data released by the National Statistics Committee showed… Industrial output plunged by 31.2% in year-on-year terms in the same period.”

Centerra’s share collapse has already cost Kyrgyzstan $500 million in nominal value. And a unilateral revision of the 2009 agreement would make it an outlaw and further impoverish a nation already one of the poorest in the world, with nominal per capita income of only $1,070. Parliamentary Deputy Marat Sultanov has said that cancellation of the Kumtor agreement would cost $2 billion, money that the government clearly does not have.

An open letter from Kumtor Operating Company employees declares, “The so-called ‘patriots of Kyrgyzstan’ represented by some representatives of the Parliament and Government, who are grieving over national interests of Kyrgyzstan, do not understand that their thoughtless actions will lead to a complete halt of production at the Kumtor mine, where…three thousand employees and citizens of Kyrgyzstan are working and providing for their families. In the event of interruption of mine operations, about ten thousand people (employees and their families) will be left without means of livelihood, adding to the already long lines of unemployed in our country.”

The open letter refers to an ongoing campaign of sabotage at Kumtor, including “blocking roads, demanding compensations for unjustified reasons, blocking the Company’s transport and robbery of Company’s provisions, fuel, etc,” and accuses the government of turning a blind eye to the sabotage.

Asked his opinion of why certain elements in Kyrgyzstan have turned against Centerra, Pearson responds, “I wouldn’t want to speculate. You’d have to ask the commission and government.” Prime Minister Babanov visited Kumtor July 6. Pearson says, “It was the first time he had visited the…mine, and he was joined by members of the State Commission and a number of media and senior executives from Centerra and Kumtor.” According to Kyrgyz news agency 24kg, “He was very angry and mentioned endless violations.”

Given all that has happened to Centerra this year in Kyrgyzstan (including a 10-day strike by Kumtor employees in February), it is reasonable to ask how secure its investment there is. Pearson says, “We’ve operated there since 1997 and gone through two revolutions [in 2005 and 2010] and haven’t missed a day of production from the political standpoint. We feel we have a very solid agreement… We’re operating the mine under those terms and continue to operate and feel we will continue to operate.”

Centerra reported May 15 a 1Q operating loss of $14.7 million, six cents per share, on revenues of $133.8 million. According to Centerra’s press release, the loss “includes $19.2 million of abnormal mining costs, $4.6 million of mine-standby costs related to the work stoppage at Kumtor and a $1 million provision for the closure of the Company’s Reno exploration office. For the same period in 2011, the Company recorded net earnings of $136.6 million or $0.58 per common share based on revenues of $250.2 million in the same quarter last year reflecting significantly higher gold production and sales.”

Pearson says the quarterly loss is an anomaly. “We had to revise the mine plan at Kumtor. This was due to some accelerated movement in the ice and waste along one part of the pit wall, and it became unsafe to mine underneath that. So we had to shift to a different part of the open pit, which reduced our overall production outlook for the year while we mitigate the problem. We’re mining in a different part of the open pit, and so we’re stripping to get into the ore starting in September. So it basically just deferred some of the ounces that were planned to be mined this year into future periods.”

Before the end of 3Q, Centerra will release a review that will “examine the limits of the ultimate pit and life of mine plan at Kumtor.”

Kumtor has had one piece of good news this year. In February, Centerra announced a significant increase in its resources. Overall, the company’s measured and indicated resources as of December 31, 2011, increased by 36%, 1.8 million gold ounces, to 6.7 million ounces total. Kumtor represents 72% of this, but Centerra is not wholly dependent on Kyrgyzstan. It has important assets in several Asian countries, most notably Mongolia.

Pearson says, “Boroo has been mining since 2004, and it is winding down. We’re currently mining to gain access to the remaining reserves in the pit for the fourth quarter and processing stockpiles there for the last couple of years to process as we wait for the final approvals of our Gatsuurt development property, which is some 35 kilometers away. It’s connected to Boroo by a 55-kilometer road. So it’s the next mine development we see going into production.”

When that will be has yet to be determined. “It’s all ready to go and operate as soon as we get the final approval from the Mongolian government,” Pearson says. “Then we’ll mine the ore at Gatsuurt and truck it back to the Boroo mill facility and process it at Boroo. Mind you, Mongolia just had a recent election. A new Parliament is being formed, and so nothing will happen before the fall session basically.”

Mining at Gatsuurt will begin with the oxide cap, and Pearson expects initial annual production of 120,000 to 150,000 ounces. “Once we get into the sulphides, production will probably come up to somewhere between 150,000 and 175,000 ounces.”

Another major Mongolia project is ATO. Pearson says, “This is about 500 kilometers to the east of our current operations in Mongolia. We’ve got a large land package there and discovered three mineralized breccia pipes which we drilled out and outlined some resources on that, about 825,000 ounces of gold, 5.5 million ounces of silver and 270 million pounds of lead and 490 million pounds of zinc. We are now in the process of converting that exploration license to a mining license.”

Centerra announced last year an initial resource calculation for its Kara Beldyr project in the Tyva Republic in Russia, 824,000 ounces, measured and indicated. Pearson also mentions “an exciting find in Turkey, our Stratex joint venture, the Öksüt property. We had a number of exciting drill intercepts there last fall and found 180-to-200-metre sections of oxidized, mineralized material averaging grades of 1.8 to 2 grams per tonne. Overall in 2012, we’re looking at spending about $45 million on exploration at all the different sites.”

And just last week, excellent assay results were released from the Akarca Project in Turkey, which Centerra has optioned up to 70% of from Eurasian Minerals TSXV:(EMX). Highlights included

Pearson believes that after Gatsuurt goes online, Centerra’s annual gold production will be “probably close to a million ounces in a few years.” He concludes with regard to Kumtor, “We’ve faced these episodes of uncertainty before. We keep working at it to build shareholder value.”

According to a report by Trevor Turnbull of Scotia Capital, Centerra now represents an “unusual buying opportunity.” He argued that it “is used to weathering political storms, including the 2010 coup d’état, without impact to its Kumtor mine.” Turnbull maintained a price target of $23.

A less-rosy assessment came from Kazakhstan’s Halyk Finance: “We believe that the company will have to agree to a higher tax rate and expenditures on environmental protection and local community development [at Kumtor]. We have Centerra Gold under research coverage with a 12-month target price of $8.80 [and] a ‘Hold’ recommendation.”