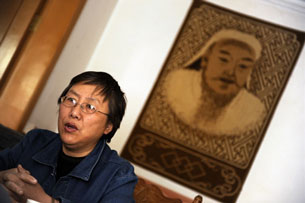 The activist wife and son of a long-imprisoned and ailing prominent Inner Mongolian dissident Hada have disappeared after speaking out about official restrictions on their family, a U.S.-based rights group said Wednesday.

They have been incommunicado for the past two weeks, with telephone calls ringing unanswered.

“Prior to their latest disappearance, Xinna and Uiles managed to get appeals out to the international community by giving interviews to several news agencies calling attention to the violation of their human rights and the authorities’ refusal to address Hada’s deteriorating health condition,” the group said.

One of the appeals included a lengthy interview with SMHRIC on Oct. 22 in which Xinna detailed Hada’s condition when she was allowed to visit him in September and restrictions authorities placed on her and Uiles.

She said that Hada, who served 15 years in jail since 1996 for “splittism” and “espionage” for his advocacy on behalf of ethnic Mongols living in China, is currently being held under extrajudicial detention at the Jinye Ecological Park in the regional capital of Hohhot and suffering from poor health.

She also noted that authorities had threatened to arrest her if she continued to speak to foreign media.

But following the interview and other contacts with media and rights groups, calls to Xinna and Uiles have rung unanswered for the past two weeks, SMHRIC said.

Xinna and Uiles were both detained shortly before Hada’s scheduled release in December 2010, when authorities raided the family’s Mongol language bookstore.

Xinna was held on charges of “conducting illegal business” and Uiles for alleged drug possession. The two were later released but kept under official surveillance.

“My request to visit Hada has continually been denied. I have contacted the Hohhot City Public Security Bureau about the whereabouts of Xinna and Uiles. They refused to tell me about this.”

Haschuluu said that authorities had cut off his phone line and threatened to take him into custody as well.

“I urged them multiple times to restore my phone line. Not only do they continue to ignore my requests but also they threaten me with arrest and detention,” he said.

Mongols are a recognized ethnic minority in China and number around six million in the Inner Mongolia Autonomous Region according to government statistics.

Before his arrest Hada had founded the Mongolian Culture Rescue Committee, later known as the Southern Mongolian Democratic Alliance, which sought greater autonomy for ethnic Mongols in China.

His continued detention comes after large-scale protests by herders and students across the region in the summer of last year, triggered by the killing of a herdsman in standoffs with mining company staff.

Official documents described the protests by thousands of ethnic Mongolians in the region’s major cities as the work of “external hostile forces.”