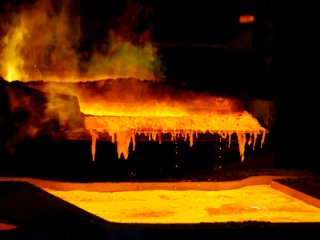 “The various TC/RC targets of smelters and mines are moving within a range of $70/t to $80/t and 7c/lb to 8c/lb,” Aurubis said in a market report.

TC/RCs are paid by miners to smelters like Aurubis to refine concentrate into metal and are an important part of the global copper industry’s income. The German company would benefit from higher charges.

“Very little is happening in the negotiations for yearly contracts,” Aurubis said, adding that the spot TC/RC market is also very quiet because of the approaching Christmas holidays.

“Prospects for rising global production of copper concentrate in 2013 coupled with the high spot market for TC/RCs mean a large increase is expected in the 2013 annual fees,” an Aurubis spokesperson added. “There are mining projects which will increase global concentrate supplies in the new year.”

When more concentrate is produced, mines and traders have to compete to gain access to smelter capacity.

Production at the new Oyu Tolgoi mine in Mongolia is set to enter the global market in 2013 while Zambia’s Konkola copper mine is also being expanded, he said.

The spot market for TC/RCs is firm and spot November deals between smelters and mines were made at around $80/t and 8c/lb, Aurubis said.

“Hardly any spot deals were reported in December so the current spot level is difficult to assess, which makes the talks about annual charges more difficult,” the spokesperson said.

Spot TC/RCs are firm partly because of high mine production as rapid wage settlements in several mines prevented strikes, he said.

Japan’s biggest copper smelter Pan Pacific Copper and a major global miner were tipped on Wednesday to settle 2013 annual contracts in the range of $70/t to $79/t and 7c/lb to 7.9c/lb.

On December 13, Aurubis reported a 4% rise in full-year earnings before taxes, buoyed by higher sales and TC/RCs despite the poor economic climate.