Cheers Turn to Screams as Bomb Blasts Thunder in Boston 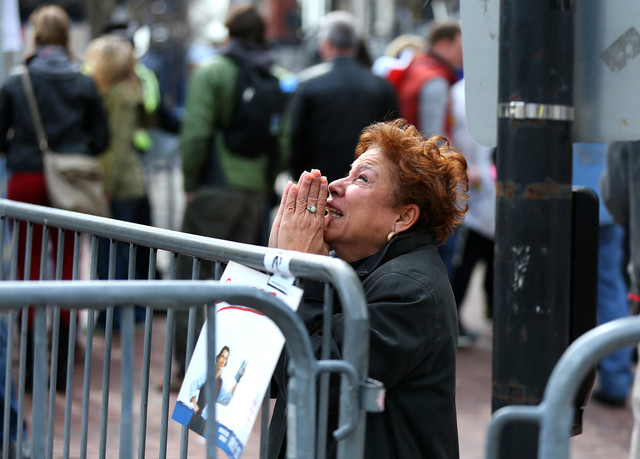 Kristen McGuinness was running about a block from the finish line when she heard one of two explosions that brought a ghastly end to her first Boston Marathon.

Rushed off the course by police, McGuinness joined other runners and spectators streaming away from historic Copley Square, the applause and cheers of moments earlier replaced by blood, smoke and screams yesterday.

“It was like a war zone,” said McGuinness, 37, of Stoneham, Massachusetts, a saleswoman for Verizon Communications Inc. “There was a little boy on the street with his legs blown off. There were three or four other bodies. I screamed when I saw them. It will be with me forever.”

Two explosions came five to 10 seconds apart, said her husband, Richard. Kristen said she knew her husband and two children were in the viewing area near the finish line. It was more than 20 minutes before she could find them.

Running a little slower or faster in a race never made more difference for McGuinness and other runners when the blasts struck about 2:50 p.m., taking at least three lives and leaving more than 120 injured.

Scott Schaeffer-Duffy, running his second marathon, said he crossed the finish line just minutes ahead of the explosion. Two miles earlier, he had started to walk. His son jumped into the race to encourage him to start running again.

“If I continued walking, I would have been right at the finish line” when the bomb detonated, he said. “His pushing me might have saved my life.”

Philip Kirkpatrick, a lawyer from Nashville was in Boston to see his wife run the marathon. He said he was standing close enough to the blast that it “knocked me back” and blew his mobile phone out of his hand.

“You have no idea how loud this was,” he said, struggling to hear questions. Kirkpatrick said he saw several people with serious injuries, including what appeared to be a severed foot on the ground.

The blasts prompted hotels to lock their doors as a precaution, stranding some out-of-towners for hours. The subway line along the busiest stretch near the finish was shut down.

Runners wrapped in silvery plastic blankets streamed down Stuart Street, two blocks from the explosion, and many huddled under heat lamps in the doorway of the Park Plaza Hotel. In the Neiman Marcus store at Copley Place, runners and their families camped on the carpet surrounded by designer bags and shoes, as the nearby Westin hotel evacuated some of its guests. Barricades blocked streets adjacent to the blasts.

Stewart, who was still wearing running shoes and a silvery wrap around his waist more than three hours after the explosions, said he pieced together what happened by word of mouth. “We heard people talking about what was going on.”

Bostonians came out of their houses and apartments and offered bewildered and chilly runners clothing and support, he said. “One girl gave out a whole duffel bag of sweaters,” Stewart said.

Others distributed water and opened their doors so runners could warm up inside and use the bathroom, he said. As Stewart spoke to a Bloomberg reporter, a man approached and asked if he needed an apartment where he could get out of the cold.

“There were ambulances coming in and going right out, one after the other,” said Kim Giroux of Tewksbury, a nurse outside a medical tent set up for weary runners and converted to treat bomb victims.

The blasts came well after the first finishers crossed the line and hours before the last runners typically straggle home, or about mid-pack — “when all the normal people were finishing,” Giroux said.

Thousands of spectators lined the 27-mile route for the marathon, always held on Patriots Day, a state holiday in Massachusetts celebrated with pancake breakfasts, a re-enactment of the Battle of Lexington and Concord, and rare morning baseball at Fenway Park.

“It’s the city’s moment,” said Heather Realini, 27, from Weymouth, Massachusetts, who waited a mile from the finish line to see a friend running for the first time. “It’s the day everyone comes together to cheer on complete strangers.”

“It’s the Boston tradition,” she said. “Everything’s changed. It will never be the same.”

To contact the editor responsible for this story: Stephen Merelman at smerelman@bloomberg.net