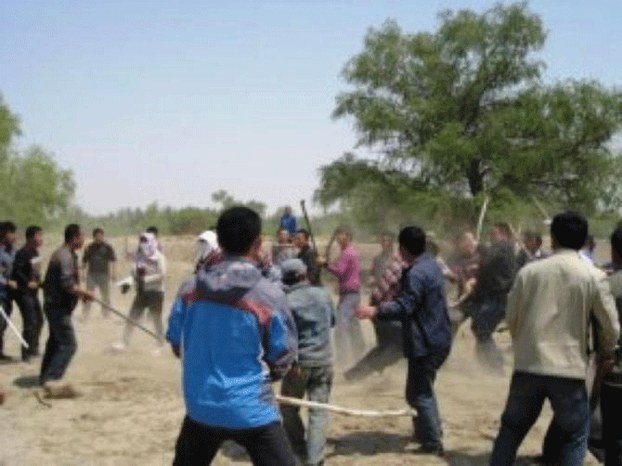 More than 100 Chinese farmers assaulted minority Mongolian herders when they tried to reclaim their leased land in northern China’s Inner Mongolia Autonomous Region, a rights group said at the weekend, highlighting tensions as Beijing expands farming and mining in the area.

The local Mongolian herders told the SMHRIC that more than 400 square mu (67 acres) of grazing land was leased to the Chinese farmers in 2003 for a term of 10 years and when the herders tried to reclaim the land on expiry of the lease, the Chinese land tenants refused to return the land.

The farmers proffered a 20-year lease contract but the herders said it was a “fraudulent document,” according to the SMHRIC.

The nearly 50 farmers insisted on continuing their use of the land and “when the herders attempted to stop them from cultivating, they gathered more than 100 personnel with batons and sticks and attacked the local herders,” said Enghebatu Togochog, the SMHRIC director.

“The Mongolians desperately need their land to be used as grazing grounds which are shrinking with desertification exacerbating the problem,” he told RFA.

Home to about 16,000 Mongolian herders, the Bayantal township had been predominantly Mongolian populated until recently.

As China’s state policy encourages Chinese farmers and investors to enter the Southern Mongolian grasslands for farming and mining, clashes between local Mongolian herders and the Chinese have become increasingly frequent over the past several years.

In May 2012, Mongolian herders from Bayantal were beaten up by the Chinese farmers as they defended their grazing lands from cultivation.

Chinese local police who arrived at the scene not only refused to stop the violence by the Chinese but participated in severely beating up and arresting the Mongolian herders. SMHRIC said.

Ethnic Mongolians, who make up almost 20 percent of Inner Mongolia’s population of 23 million, complain of destruction and unfair development policies in the region. The overwhelming majority of the residents are Han Chinese.