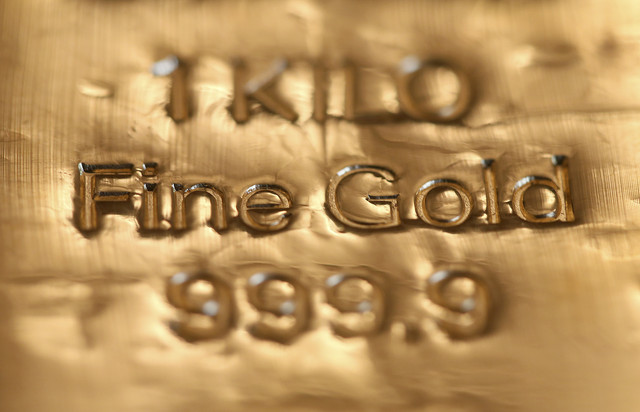 Gold, down 17 percent since January, is poised to lose 20 percent in a year as inflation fails to accelerate and with the worst risks to the global economy waning, Credit Suisse Group AG said.

Gold will trade at $1,100 an ounce in a year and below $1,000 in five years, according to Ric Deverell, head of commodities research at the bank. Lower prices are unlikely to lure more central-bank buying, said Deverell, who worked at the Reserve Bank of Australia for 10 years before joining Credit Suisse in 2010.

“Gold is going to get crushed,” Deverell told reporters in London today. “The need to buy gold for wealth preservation fell down and the probability of inflation on a one- to three-year horizon is significantly diminished.”

Investors are losing faith in the world’s traditional store of value even as central banks continue to print money on an unprecedented scale. Bullion slumped into the bear market last month after a 12-year bull market that saw prices rise as much as sevenfold. Gold is a “wounded bull,” Credit Suisse said in a Jan. 3 report.

Gold may slip to $1,350 in the next couple weeks, Deverell said. The metal is still too expensive relative to other “real assets” such as base metals, according to Credit Suisse. The bank said bullion may peak in 2013 in a December report.

While central banks have a broad strategic plan to diversify reserves, their managers wouldn’t want to lose money if gold enters a period of declines, Deverell said.

Combined gold reserves held by central banks have risen to an eight-year high as nations from Russia to Kazakhstan to Mongolia expanded holdings, the International Monetary Fund data show. The banks bought 534.6 metric tons last year, the most since 1964, and may add as much as 550 tons in 2013, the World Gold Council estimates.

“When gold is going up, it looks like a great idea to buy more gold,” Deverell said. “And when it’s going down, do you really think risk-averse central bankers are going to try and catch the knife? No.”

Gold has the worst 12-month outlook among commodities and will trade below $1,400 in a year, according to investors polled by Credit Suisse in London on May 15. Goldman Sachs Group Inc. said April 23 bullion may slide to $1,390 in 12 months, and Deutsche Bank AG predicts a drop to as low as $1,050.

A surge in demand for bars, coins and jewelry following gold’s drop to a two-year low in April is temporary, Deverell said. The U.S. Mint said April 23 it ran out of its smallest gold coins and Australia’s Perth Mint said volumes jumped to a five-year high. India’s bullion imports may surge 47 percent to 225 tons in the second quarter to meet consumer buying, according to the All India Gems & Jewelery Trade Federation.

“This is bargain-buying,” Deverell said. “It’s like when you have cash for clunkers in autos, you bring forward activity, but it’s not a massive addition to buying.’

To contact the reporter on this story: Maria Kolesnikova in London at mkolesnikova@bloomberg.net

To contact the editor responsible for this story: Claudia Carpenter at ccarpenter2@bloomberg.net