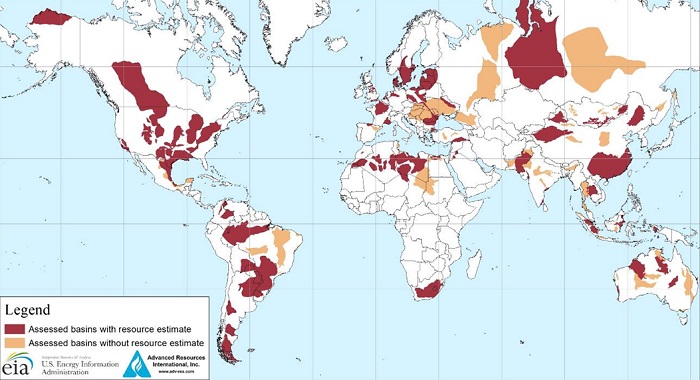 Shale fields could add 7,299 trillion cubic feet of natural gas and 345 billion barrels of oil to global reserves, according to a US Energy Information Administration report released Monday.

Basins of shale oil and gas around the world:

The much publicized US shale boom has a number of environmental, political and economic consequences, including the possibility of America becoming the world’s top petroleum producer.

Shale has already transformed the US energy market, and the EIA report attempts now to “quantify the potential global significance of the shale boom.”

The report explicitly mentions its own shortcomings, suggesting that the estimates are “highly uncertain and will remain so until they are extensively tested with production wells.” Economic viability is not assessed in the report.

Development of shale requires use of the controversial drilling technique of hydraulic fracturing or ‘fracking,’ which is still banned in some countries including France and Bulgaria.

Sources: US EIA; Phys.org; The BBC