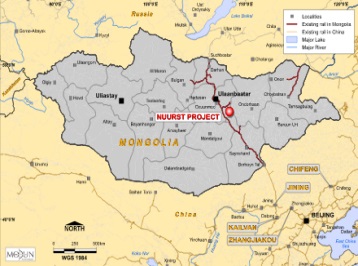 Modun Resources (ASX: MOU) has achieved another significant milestone on the road to production at the Nuurst thermal coal project in Mongolia, following the approval of its application for a mining licence.

Critically, Nuurst is located just 6 kilometres from existing railway infrastructure, with Modun the only international company recently selected as a preferred supplier of coal to the Mongolian Government under their “Clean Air Initiative.”

The Mineral Resources Authority of Mongolia (MRAM) granted the approval over a total area of 2497 hectares covering the planned open pit mine, plus an encompassing area for surface infrastructure.

Importantly – the Nuurst project met all the key criteria of technical, economic and environmental sustainability as set out by the MRAM governing body.

The licence area also includes the Resource area that remains open to the North of the planned mine.

Rick Dalton, managing director for Modun, commented: “this is a significant achievement and critical milestone for Modun as we move towards the development of the mine and keeps us on a 12-18 month time-frame towards first production of coal.

“It is the culmination of a tremendous effort by the Mongolian Team, with Perth management support and confirms the willingness of the Mongolian Government to support the development of high quality projects such as Nuurst.”

Modun continues to move the project forward at speed, with a detailed Feasibility Study to commence expanding on the Initial Mining Study which identified the potential for an 84.7 million tonne mine of sub-bituminous thermal coal for a 30 year mining operation, with production ramping up to 3 million tonnes per annum by the fourth year of operation.

Indicative production costs are estimated at US$13 per tonne over the life of the mine, at today’s costs, reflecting the low overall mining ROM strip ratio of 2.3:1.

The feasibility work is an important step for obtaining the financing required for the mine development, and will seek to confirm the overall infrastructure and mine costs, and the final mine plan in order to maximise the economic benefits from the mine.

This will include some hydrogeological drilling on site.

Infrastructure is the key

Nuurst is strategically located near key infrastructure which not only helps move product from the project to the end user, but is in close proximity to reduce operating costs.

Nuurst is located 6 kilometres from existing railway infrastructure, 120 kilometres south of the Mongolian capital, Ulaanbaatar, and is 600 kilometres by rail from the Chinese border.

Other major infrastructure in the vicinity includes a 35kV power supply within 6 kilometres of the project, and a 220kV powerline runs around 22 kilometres from the licence boundary.

Just last month Modun was the only international company selected as a preferred supplier of coal to the Mongolian Government under their Clean Air Initiative.

The next step for Modun is that the key terms and conditions of the Product Sale and Purchase Agreement will be negotiated directly with the Mongolian Government, with the briquette plant to have an initial name plate capacity of 200,000 to 250,000 tonnes per annum.

Modun remains on the fast track to commercialising Nuurst, which can produce a quality coal product – and today’s approval provides the company with greater certainty over the time frame to progress with the development of a mine.

Modun can therefore advance discussions with potential customers, and to aggressively pursue other commercial opportunities, which includes the off-take agreement as a preferred supplier of briquettes to the Mongolian Government as part of their clean air initiative.

Negotiations are also progressing with the Mongolian Government for a Product Sale and Purchase Agreement.

The company is therefore strategically well-placed to tap the growing energy demand in Mongolia and from Northern China, with thermal coal remaining the most economic source of energy in the region – and it remains in high demand.

A detailed Feasibility Study is to commence expanding on the Initial Mining Study which identified the potential for an 84.7 million tonne mine of sub-bituminous thermal coal for a 30 year mining operation.

Today’s news is another value enhancing ‘win’ for Modun, and Proactive Investors expects the company to trade higher in the short term, and further strengthen in the medium term as other milestones are met on the road to production.