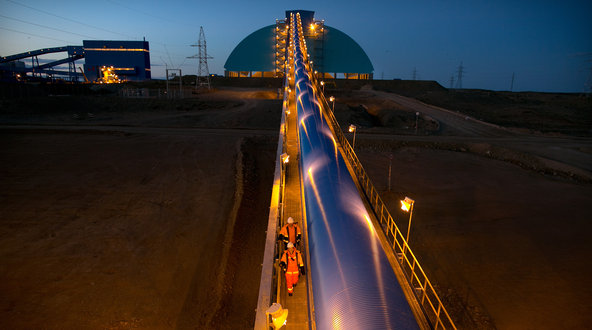 VANCOUVER, CANADA – Turquoise Hill Resources today announced its financial results for the quarter ended June 30, 2013. All figures are in US dollars unless otherwise stated.

Commissioning of the Oyu Tolgoi mine’s concentrator progressed during Q2’13, and by the end of Q2’13 the concentrator had consistently achieved throughput above 70%.

The concentrator is now consistently achieving throughput rates above 80% of design capacity.

Concentrator production is in stabilization and optimization phase and is expected to reach full capacity in the second half of 2013.

On July 9, 2013, Oyu Tolgoi commenced shipping concentrate to customers in China with an initial sale of approximately 5,800 tonnes of concentrate.

On August 7, 2013, the Company signed a binding term sheet with Rio Tinto for a new funding package.

Funding and development of the Oyu Tolgoi mine’s underground will be delayed until matters can be resolved with the Mongolian Government and a new timetable has been agreed.

Turquoise Hill and Rio Tinto continue to work with the Mongolian Government to reach a common understanding and satisfactorily resolve a range of outstanding issues.

Underground lateral development at Hugo North continued during Q2’13 with approximately 1,400 metres achieved; sinking of Shafts #2 and #5 progressed during Q2’13.

Production at Inova’s Starra 276 mine continued to ramp up during Q2’13 with over 59,000 tonnes of ore produced during June 2013, the expected monthly mining rate.

Commenting on second quarter results, Kay Priestly, Turquoise Hill Chief Executive Officer, said, “The production ramp-up at Oyu Tolgoi is progressing and the concentrator in now consistently achieving throughput rates above 80% of capacity. The commencement of concentrate shipments from Oyu Tolgoi was a significant operational milestone and the mine is currently delivering concentrate to customers. We continue to work with Rio Tinto and the Government of Mongolia on project financing as well as a range of other issues in order to reach a common understanding and successfully resolve matters.”

Turquoise Hill Resources (NYSE, NASDAQ & TSX: TRQ), formerly Ivanhoe Mines, is an international mining company focused on copper, gold and coal mines in the Asia Pacific region. The company’s primary operation is its 66% interest in the Oyu Tolgoi copper-gold-silver mine in southern Mongolia, which is expected to begin commercial production in the first half of 2013. Other assets include a 58% interest in Mongolian coal miner SouthGobi Resources (TSX: SGQ; HK: 1878); and a 57% interest in copper-gold miner Inova Resources (ASX, TSX: IVA), formerly Ivanhoe Australia.