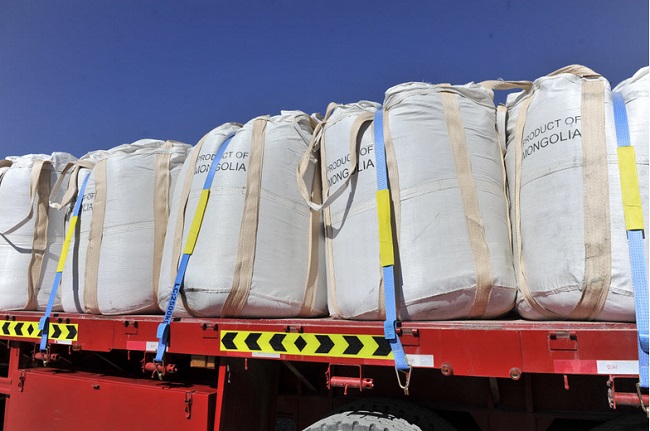 The massive Oyu Tolgoi copper/gold mine, in Mongolia, has started to receive payments for copper concentrate shipped to a warehouse in China, but has not yet recorded any revenue owing to Chinese customs approval delays, 66% project owner Turquoise Hill Resources reported on Monday.

The company, which is majority-owned by Rio Tinto, explained that the $6.2-billion mine would only record revenue when customers withdrew concentrate from the warehouse.

Oyu Tolgoi’s customers were currently engaged with Chinese customs officials to receive the necessary approvals to enable them to collect bought concentrate from the warehouse. Turquoise Hill said that once the approvals were in place, concentrate withdrawal would quickly ramp up to a point where sales would be aligned with production rates by the end of the year.

Oyu Tolgoi produced 160 000 t of copper concentrate and shipped about 38 000 t of concentrate to the Chinese warehouse between the time it began its first shipments in July and September 18. Another 122 000 t was currently being held in inventory at the mine.

“Production has not been impacted while customers work through the Chinese customs process,” the company said.

Seven years later, at its peak, it is expected to produce about 1.7-billion pounds of copper and one-million ounces of gold a year.

Rio Tinto warned at the time Parliamentary approval would be a complex process that would take some time.

The government, which owns a 34% stake in the project, later clarified that Parliamentary approval was not needed, despite the government having questions about the project financing for the project, which is expected to boost the country’s economy by 35% by 2020.

Oyu Tolgoi project represented a critical pillar of the Mongolian government’s economic growth plans but recent attempts to change the terms of the project, following the introduction of a more restrictive foreign investment policy, had taken its toll on the Mongolian economy.

Mongolia in August said it planned to scrap a controversial law designed to curb foreign ownership in what it considered to be strategic sectors, such as mining, as the country sought to kickstart its stalled economy.

The new measure, if passed, would replace the 2012 Strategic Entities Foreign Investment Law, which analysts had said was partly responsible for a slump of 43% in overseas investment in the first half of 2013, on a yearly basis.