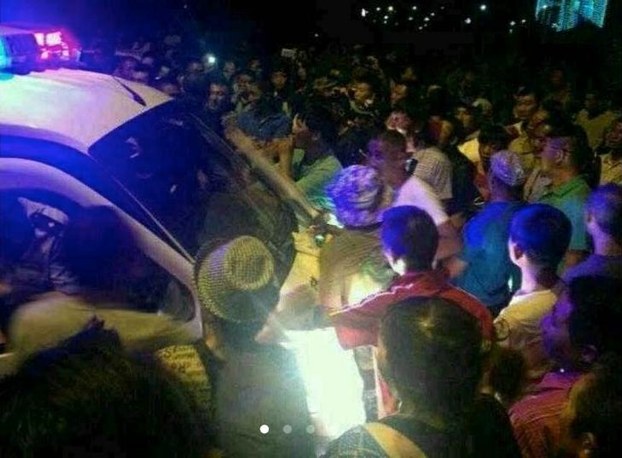 Amid growing tensions in China’s Inner Mongolia over what herders say is the government-backed exploitation of their traditional grazing lands, police have launched a series of “anti-terrorism” drills in recent days, confiscating weapons and explosives from the the civilian population, a U.S.-based rights group said Wednesday.

“The Chinese authorities carried out a series of anti-terrorism drills and civilian disarmament campaigns amid escalating tensions between Mongolians and Chinese over mining, environmental destruction and land expropriation in [Inner] Mongolia,” the New York-based Southern Mongolia Human Rights and Information Center (SMHRIC) said.

The drills were carried out under the code-name “2013 – Mission Stability,” in and around the eastern city of Tongliao, which is home to around 1.5 million ethnic Mongolians.

“In order to effectively respond to the complicated and volatile social stability situation … more than 15 [police, fire and medical] units … joined the anti-terrorism drill,” the Inner Mongolia Autonomous Region police department said in a statement on its official website.

It said more than 1,700 security personnel, many of them armed, had taken part.

At the drill, regional political commissioner for the ruling Chinese Communist Party Yao Yongbo called on the Tongliao authorities to “be fully prepared to meet any challenge and develop an elite force of anti-terrorism troops,” the statement said.

The authorities claim to have confiscated nearly 50 metric tons of explosives, more than 120,000 detonators, more than 2,000 guns and more than 32,000 knives from local residents, the regional police website reported on Sept. 25.

But they gave no indication of the context in which the items were found, nor the timescale over which they were collected.

According to SMHRIC, many of the “knives” confiscated at train stations and airports during the National Day holidays last week were traditionally decorated Mongolian knives, which are usually bought as gifts.

“Many complained that beautifully decorated Mongolian knives bought as gifts were confiscated at train stations and airports across the region,” the group said.

The guidelines aim to “develop” Inner Mongolia as a strategic military defense zone around Beijing, as well as a source of “clean” energy, coal and rare earth, the center said, quoting Chinese websites.

Temtsiltu Shobtsood, the chairman of the U.S.-based Inner Mongolian People’s Party, said that Chinese authorities are using the terrorism drills and disarmament campaign “as an excuse” to crack down on the Mongolian rights movement.

“The most recent conflicts between civilians and the government [in Inner Mongolia] are related to grassland occupation,” he said.

“I believe that there have been no ‘acts of terror’ so far in Inner Mongolia. What Mongolians are doing is protecting their rights. The Chinese government is using the anti-terror drills as an excuse. Any rebellion by Mongolians will be labeled as an act of terror.”

Ethnic Mongolians, who make up almost 20 percent of Inner Mongolia’s population of 23 million, complain of environmental destruction and unfair development policies in the region, and clashes between traditional herding families and Chinese officials and mining companies have become increasingly common.

Six ethnic Mongolian herders who clashed with Chinese workers from a state-run forestry company that illegally occupied their grazing land are facing up to seven years each in prison on trumped-up charges of sabotage and destruction of property.

According to a document issued by the prosecution office, the six herders repeatedly blocked Shuang He’s vehicles, confiscated their saplings, and leveled cultivated land, causing “direct damage” of 32,682 yuan (U.S. $5,340) and “indirect damage” of 54,000 yuan (U.S. $8,820).

But Tulguur’s family said this week they had yet to see a copy of the document.

“We haven’t received the charge sheet,” Tulguur’s wife Sarangowaa told RFA’s Cantonese Service. “The lawyer has, but we haven’t. The lawyer says its a secret, and won’t let us read it.”

She said the government’s prosecution office had hired five lawyers to prosecute the six men.

“We have lawyer Zhou and Hu Baolong, who will argue that they are not guilty.”

The herders have previously said that damage caused by their demolition of an unoccupied tent they claim the company illegally erected on their land was “minimal.”

The families of the men say they are being prosecuted by officials anxious to stamp out growing unrest among herders, and keen to cover up the level of corruption linked to the appropriation of local grazing land.

Reported by Hai Nan for RFA’s Cantonese Service and Gao Shan for the Mandarin Service. Translated and written in English by Luisetta Mudie.