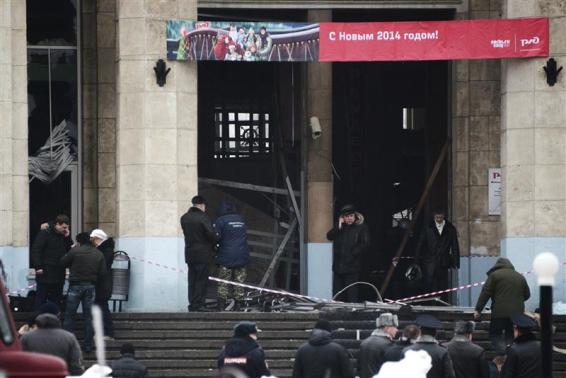 (Reuters) – A female suicide bomber blew herself up in the entrance hall of a Russian train station on Sunday, killing at least 13 people in the second deadly attack in the space of three days as the country prepares to host the Winter Olympics.

The state Investigative Committee said the bomber detonated her explosives in front of a metal detector just inside the main entrance of Volgograd station. Footage shown on TV showed a massive orange fireball filling the hall and smoke billowing out through shattered windows.

“People were lying on the ground, screaming and asking for help,” a witness, Alexander Koblyakov, told Rossiya-24 TV.

A spokesman for Russian investigators said at least 13 people died, although the regional governor put the toll at 15.

Russian Heath Ministry spokesman Oleg Salagai said 42 people were wounded and that some would be flown to Moscow for treatment.

Volgograd is a city of around 1 million people, about 430 miles northeast of Sochi, where the Winter Olympics – a major prestige project for Putin – will open on February 7.

Formerly known as Stalingrad, it lies close to Russia’s North Caucasus, a strip of mostly Muslim provinces plagued by near-daily violence in a long-running Islamist insurgency.

Insurgent leader Doku Umarov, a Chechen warlord, urged militants in a video posted online in July to use “maximum force” to prevent Putin staging the Olympics.

An attack by a female suicide bomber killed seven people in Volgograd on October 21. On Friday, a car bomb killed three people in the southern Russian city of Pyatigorsk, 270 km (170 miles) east of Sochi.

The station was busier than usual, with people travelling home for the New Year holidays. TV footage showed emergency services carrying out victims, with at least one body lying motionless on the ground.

Another witness, Vladimir, said: “I saw melted, twisted bits of metal, broken glass and bodies lying on the street.”

Sunday’s attack was the deadliest to strike Russia’s heartland since January 2011, when Islamist insurgents killed 37 people at a Moscow airport.