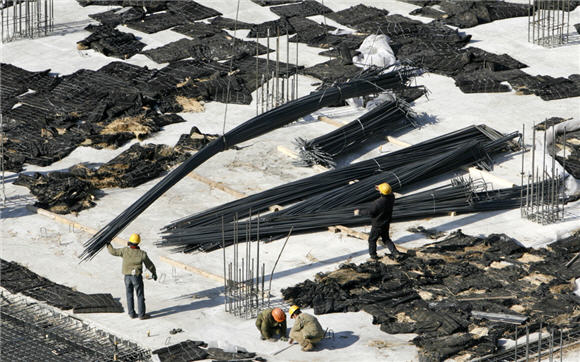 The price of iron ore eked out a slight gain, but remained just off 6-months lows on Wednesday, as prospects for the Chinese steel industry continue to darken.

The benchmark CFR import price of 62% iron ore fines at China’s Tianjin port added 0.2% to $123.50 a tonne on Tuesday, a level last seen July 8 and down 8% since the start of the year according to data supplied by The Steel Index (TSI). Benchmark prices averaged $135 a tonne last year.

Free-on-board prices from Brazil fell the most and are down more than $10 over the last week, falling below the psychologically important $100 a tonne level to $99.26 on Monday, while Australia’s export price also lost ground to $114.36. Australia supplies more than half of Chinese imports with Brazil 19% followed by South Africa at 5%.

China Iron & Steel Association (CISA) data released for 1-10 January show the country produced an average of 1.99 million tonnes of crude steel per day, up slightly on the previous 10-day period, but at levels last seen a year ago.

On Wednesday Shanghai rebar, the most actively traded steel futures contract worldwide, dropped close to its record low of September 2012 at 3,403 yuan ($560). Stockpiles of iron ore at major Chinese ports have also been climbing steeply, reaching close to 80% of monthly consumption or 80 million tonnes, up from 60% in July.

However, Chinese steel production growth is likely to slow in 2014 as authorities clamp down on pollution in the industry and address overcapacity and lack of profitability, by banning new steel plants, enforcing stricter environmental controls, tightening credit and withdrawing stimulus.

Chinese steel mills have been in oversupply since 2004 and efforts by the new leadership to steer the country to a consumption-based economy and away from infrastructure investment led growth will also dampen growth.

Xu Lejiang, chairman of China Iron & Steel Association, recently predicted crude steel output growth of 3.1% in 2014, less than half the 7.5% registered in 2013.

All is not doom and gloom however.

Research house Capital Economics point out that “as a key source of local government revenue and employment, [China's steel] sector is politically sensitive. As a result, steel production is unlikely to fall sharply,” adding that as high cost producers are driven out prices could pick up again in 2015.

And elsewhere the outlook is brighter:

“More positively, consumption growth could pick up outside of China owing to a nascent recovery in the EU’s auto and construction sectors, continued growth in those sectors in the US and a pick up in India’s consumption – if the mid-term elections there lead to higher levels of capital expenditure.”

Metallurgical coal, the other crucial ingredient in the steelmaking process, has also come under pressure this year and briefly fell below the iron ore price in contradiction of a long-held industry rule of thumb.

TSI’s price for premium hard coking coal (FOB Australian east coast exports) reached a high of $172 a tonne in February last year, but then hit multi-year lows in July at the same time iron ore price slumped, before recovering. Thursday coking coal was back below July’s lows at $130.80 a tonne on Thursday.

Unlike iron ore, where imports constitute a large and growing portion of Chinese consumption, China is largely self-sufficient in coking coal.

At the same time that China is slowing, supply of both iron ore and coking coal will climb again in 2014 after an already robust growth figure last year.

Australia, Sierra Leone, Guinea, Brazil, Canada and Mongolia will add iron ore capacity this year, while met coal supply will increase as projects in Mozambique and Mongolia come on stream.