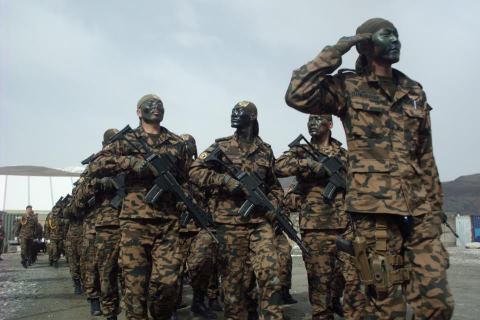 The significance of US Defense Secretary Chuck Hagel’s visit to Ulan Bator this month should not be overlooked.

U.S. Secretary of Defense Chuck Hagel will touch down in Ulan Bator this month, marking the first visit of a defense secretary to Mongolia since Donald Rumsfeld toured the landlocked country in 2005. Hagel’s trip will be the tail end of an action-packed itinerary, with stops in Japan and China, where strategic anxieties remain high over their vitriolic row in the East China Sea. Mongolia, on the other hand, presents Hagel a less challenging atmosphere. But while U.S.-Mongolia defense relations may lack the intensity of Washington’s other networks in the region, the significance and potential of the partnership going forward should not be dismissed.

Hagel’s upcoming visit is largely being played up as a courtesy call and expression of thanks for Mongolia’s contributions to U.S.-led interventions in Afghanistan and Iraq. But it would be unfair to Ulan Bator to characterize the trip purely in terms of diplomatic etiquette. Indeed, there is something more transformational happening in Mongolia’s security doctrine and these changes are not going unnoticed in Washington. Mongolia has rounded out its foreign policy, both in economic and security terms, to distance itself from a historic overdependence on its two weighty neighbors – Russia and China. This “third neighbor” policy has prompted Ulan Bator to look at enhancing its strategic relationships with U.S. and other large economies such as Japan, Canada and several countries in Europe.

It is this more fundamental shift in Mongolia’s approach and – more significantly – its implications for U.S. interests both in East and Central Asia that is the real impetus for blossoming defense ties. Ulan Bator has been brandishing its role as stakeholder on international security issues through several theaters. In 2012, Mongolia deployed peacekeepers to a high-risk area on the border of South Sudan and Sudan. Soldiers from the Mongolian Armed Forces (MAF) also served in the NATO-led Kosovo intervention from 2005-2007. Other peacekeeping deployments over the past decade include Sierra Leone, Chad and Georgia. These commitments, along with the MAF’s efforts in Afghanistan and Iraq, have helped bolster Ulan Bator’s with the U.S. and NATO.

The fruits of Ulan Bator’s labor came via NATO’s decision in 2012 to formalize cooperation with Mongolia by signing an Individual Partnership and Cooperation Programme, which aims to enhance the interoperability of MAF troops with those of NATO members. And, as noted in earlier articles, Mongolia also continues to improve interoperability with the U.S. and other NATO through its annual hosting of the rapidly expanding “Khaan Quest” peacekeeping exercises which were held for the tenth time this past summer. While serving tactical and capacity building purposes, the Khaan Quest exercises have also contributed to building regional confidence building as the attendees come from dozens of countries, from Asia, Europe and North America.

Mongolia’s focus on the peacekeeping niche has resulted in a dramatic modernization of the MAF to adapt this evolving mandate. Former Mongolia hands Christopher Pultz and Jonathan Addleton have noted that the MAF’s reorientation on is centered on three goals: developing capacity to participate in UN-led missions, bolster counterterrorism efforts and enhance its role in humanitarian and disaster relief missions. These goals are supported by Washington’s financial and diplomatic support to bulk up the MAF’s capacity through the creation of a Peace Support Operation Training Center and the provision of non-lethal supplies such as uniforms and protective gear. The pay-off has been tangible. Pultz recently noted that, “Mongolia has deployed over five thousand personnel in fifteen global missions supporting both U.S. – and NATO-led coalitions and UN peace-support operations since 2002. In relation to the size of its population, Mongolia’s contribution is extraordinary; the country is ranked 26th on the UN’s list of contributing nations.”

While Hagel’s visit is a welcome benefit, it would be a mistake to interpret this as a goal for Mongolia. President Tsakhiagiin Elbegdorj has bigger and bolder plans for his country to play a prominent role in Northeast Asia as a center for internationally supported peacekeeping operations. The policy, which is bolstered by the MAF’s significant effort despite its diminutive size (fewer than 10,000 active soldiers), goes hand-in-hand with Elbegdorj’s “third neighbor” approach, which provides Mongolia an air pocket from its economic and security reliance on Beijing and Moscow. The softer side of this diplomatic push has been demonstrated by Ulan Bator’s membership in the Organization for Security and Cooperation in Europe and its previous chairmanship of the Community on Democracies. Ulan Bator has also been promoting its soft power as an interlocutor through its active engagement as a meeting venue between Japan and North Korea over the lingering issue of abducted Japanese citizens.

Cementing defense ties with the U.S., while not going as far as becoming a treaty ally for obvious geostrategic reasons, helps Mongolia’s national security priorities. Hagel’s visit will likely highlight the accomplishments mentioned earlier and chart a course for the future of the U.S.-Mongolia defense relationship. Specifically, such a partnership must focus on continuing to train and build the capacity of the MAF, while also taking time to assist Ulan Bator on necessary institutional defense reforms. But, equally important to these tactical efforts will be a joint push to get Mongolia more impactful and integrated into the developing regional security architecture in Asia.

The atmospherics surrounding the turbulence between Japan and China will, rightly so, grab attention during the front-end of Hagel’s trip. But let’s not overlook the third stop. It might be nearly a decade since Defense Secretary Don Rumsfeld visited Mongolia, but the high-level relationship is not starting from scratch. In fact, since that time there have been repeated visits by undersecretaries and assistant secretaries of defenses. The Mongolia defense minister was in Washington in 2011 and former U.S. Secretary of State Hillary Clinton toured Ulan Bator the following year. The two also continue to operate the U.S.-Mongolia Bilateral Consultative Council (BCC), which has been held since 1999. The significance of the budding partnership was summed up at last year’s BCC held in Washington. Both sides agreed that the relationship should transcend years of mere dialogue and be elevated to a “strategic partnership.”