﻿ www.unuudur.com » Is Ulaanbataar Running Out of Water?

Is Ulaanbataar Running Out of Water? 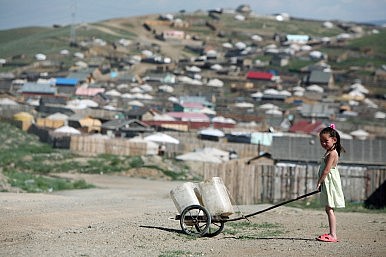 Once known for its abundant and immaculate waters, the Tuul River flowing through Mongolia’s capital Ulaanbataar is rapidly shrinking. The Tuul has historically swung from high-flow cycles to low-flow cycles, but it had never dropped to the levels touched between 1996 and 2012, when its average water flow fell to around 10 cubic meters per second, against a historical average of 25 cubic meters a second, according to figures from Mongolia’s Institute of Meteorology and Hydrology. Back in 2009, the river’s runoff appeared so compromised that a local environment news agency claimed it had become “a small creek.” The Tuul river feeds the aquifer that provides Ulaanbataar with most of its water. As its streamflow shrinks, the recharge capacity of the aquifer is also being compromised, at a time when the city’s water needs are booming. The threat of water scarcity looms large on Ulaanbataar’s horizon.

“The city is indeed going to face water shortages in the near future,” Batsukh Baljinnyam, head of the technical and policy department of state water utility Usug, which is in charge of water and sewage services in Ulaanbataar, told The Diplomat.

“Scarcity problems will emerge in 2015, and intensify from 2020 onwards. We need to find new water sources.”

With 1.3 million citizens, Ulaanbataar is home to around 40 percent of Mongolia’s total population and represents its natural economic hub, producing more than a half of its national GDP. Water use has grown hand in hand with the demographic and economic boom the city has experienced over the last 20 years. Today, Usug distributes some 160,000 cubic meters a day of water for domestic use. The company estimates that another 130,000 cubic meters a day are drained from the aquifer by private wells run by industries and individuals. At around 300,000 cubic meters a day, the city uses twice as much water as it did 20 years ago, and that thirst looks set to continue to grow.

As many as 746,766 citizens living in the poorer ger districts lack direct access to water and sanitation. Their domestic water use barely reaches 10 liters per day, way below the 50 to 100 liters per day the World Health Organization (WHO) identifies as the threshold to ensure that most basic needs are met. As the government develops its plans to improve water infrastructure in the ger districts and move some of the dwellers to modern housing, water domestic usage will rise: owners of modern apartments in Ulaanbataar currently use more than 200 liters per day, according to 2010 Usug figures. At the same time, additional water will be needed to cater to the city’s growing industrial and economic activities. Total water usage is set to double by 2030 and triple by 2040, according to estimates by the Korean International Cooperation Agency (KOICA).

Decreasing recharge levels due to the Tuul River’s shrinking water flow, which researchers largely trace back to climate change phenomena, as noted by Davaa Gombo, head of the hydrology unit at Mongolia’s Institute for Meteorology and Environment monitoring (IMH), and increasing withdrawals pose a serious threat to the equilibrium of Ulaanbataar’s aquifer.

The search for new water resources has already begun. As groundwater cannot be exploited further, Usug engineers are focusing on projects that aim to develop surface waters, such as a water reservoir in the upper part of the Tuul water basin. With total costs estimated in the order of $300 million, the project is likely to be developed under a public-private partnership (PPP) scheme, Usug’s Batsukh confirmed. A definitive feasibility study for the project, first conceptualized in 1981 by Russian engineers, has yet to be completed and many details such as the exact location and land issues remain to be addressed, Sosorbaram Ts., head of state-owned water authority Mongol Us, said in an interview with local newspaper UB Post.

“There is a lot water potential in Ulaanbataar well beyond the project of a water reservoir,” IMH’s Gombo told The Diplomat.

Water reuse technologies feature among the possible options for easing the pressure on Ulaanbataar’s aquifer. Local private concessionaire Morit Impex is trying to develop a $200 million wastewater treatment plant project able to treat 200,000 cubic meters per day of sewage coming from the city. The new facility will make it possible to recycle some 67,500 cubic meters of treated water to meet the needs of the city’s three active coal power plants, which currently use groundwater.

Besides, there is large room to make water distribution and usage more efficient. The city’s decade-old water network leaks up to 30 percent of the water it distributes. On the other hands, citizens living in modern apartments pay water tariffs as low as 320 tugriks ($0.18) per liter, making Ulaanbataar apartment water one of the world’s cheapest. A marginal 10 percent increase in the city’s water tariffs would result in a 12 percent reduction in residential consumption, whereas doubling the price would lead to a 21 percent cut, according to a PHD thesis by Altai Zulgerel, a researcher at Australia’s James Cook University.

However, Mongolia’s water challenge is not limited to Ulaanbataar.

“From average per capita point of view, Mongolia looks like a country with abundant water resources, yet resources are unevenly distributed, with most of them in located in the northern part of the country, whereas the southern aimags (provinces) have almost none,” Sarantuyaa Zandaryaa, Unesco’s programme specialist for urban water management and water quality, told The Diplomat.

With thousands of rivers and lakes, mostly located in northeastern and northwestern aimags, including Khövsgöl Nuur, Asia’s second-most voluminous freshwater lake, Mongolia boasts some 12,635 m3 of renewable freshwater per capita, six times as much as China and four times as much as Kazakhstan, two of its largest neighbors, according to figures from the World Bank. Moreover, the country currently uses just over 1 percent of its renewable water resources, also according to World Bank figures.

However, physical scarcity affects both central and southern aimags, whereas water-rich aimgas suffer from so-called water scarcity, with no financial or infrastructure means to develop their water resources for human and economic development, Unesco’s Sarantuyaa noted.

This poses a great challenge to the development of Mongolia’s agriculture and mining sectors. The latter has been the driver in the country’s economic resurgence and authorities are trying to lay the ground for the full development of the country’s mineral wealth. Yet most deposits are located in the southern Gobi desert aimags, where water resources are extremely scarce, leading to fragile equilibriums between competing users: mining companies on the one hand, local inhabitants on the other. Water-related issues feature among the reasons why a multi-billion expansion of Oyu Tolgoi, the country’s flagship mining development jointly owned by the state and mining powerhouse Rio Tinto, has been put on hold until a new agreement between the government and the company is struck.

A number of water transfer projects aiming to transfer part of the waters of northern Orkhon and Selenge rivers to cater to the needs of the growing mining industry in the south are currently under assessment. They entail water pipelines stretching for hundreds of kilometers through the steppe, a plan that would involve huge financial and physical capital.

“With an adequate pipeline in place, half of the water flow of one of the many mid-sized rivers in northern aimags would be enough to cater to the needs of the mining industry in the south, but first we need to define environmental flow constraints,” IMH’s Davaa said.

The Brisbane Declaration defines environmental river flow as follows: “Environmental flow management provides the water flows needed to sustain freshwater and estuarine ecosystems in coexistence with agriculture, industry, and cities.” A number of countries have adopted this as a reference to the sustainability of water use in certain basins. Mongolia has not yet followed suit, but the sooner it draws a line to define sustainable use thresholds for its river waters, the quicker authorities, citizens and private businesses will find the best way to address the country’s water challenges in Ulaanbataar, Oyu Tolgoi and elsewhere.