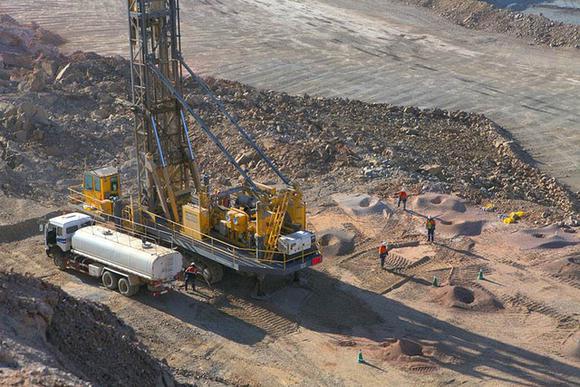 So tantalizingly close, yet so disappointingly far apart. That might be the best way to describe Rio Tinto’s (NYSE: RIO ) position with its investment in Oyu Tolgoi, the Mongolian copper and gold project in the Gobi desert.

Long involved in a cantankerous relationship with its government partner, which owns 34% of the mine, Rio Tinto has run into opposition over who should pay how much to expand operations there. It was forced to halt development of the underground portion of the project, where some 80% of the mine’s value is estimated to reside. Its Turquoise Hill Resources (NYSE: TRQ ) unit, which owns the other two-thirds of Oyu Tolgoi, has faced financial difficulties along the way as well and last year laid off some 1,700 workers, which seemingly further poisoned the well of amity between the parties.

Now Rio Tinto says it will lay off hundreds more workers as it continues to rein in costs across far-flung operations. The copper and gold project may be potentially lucrative, but with all the hurdles that remain in its path to realizing its full value, Oyu Tolgoi becomes an easy target for the budget ax.

Oyu Tolgoi is one of the five largest copper projects in the world, with Rio Tinto producing 77,000 tonnes of copper last year, toward the low end of the 75,000 to 85,000 tonnes it estimated the site would produce. It also produced 157,000 ounces of gold. During the first quarter of 2014, however, Turquoise Hill said the mine achieved its first month of positive operating cash flow in March.

Over its lifetime, the mine is projected to annually produce more than 1.2 billion pounds of copper, 650,000 ounces of gold, and 3 million ounces of silver. Shipments to China also began last year after a series of delays imposed by Mongolia. Analysts predict that if the project gets fully financed and hits peak production, it could boost the country’s economy by 35% by 2020.

Despite the disagreements over financing the mine’s underground expansion, everyone remains committed to seeing it done, and Turquoise Hill said earlier this month that 14 of the 15 banks participating in financing Oyu Tolgoi agreed to extend their commitment letters through the end of September. As a result, Turquoise Hill said it now has sufficient commitments to reach its funding goal and still expects a response from the holdout bank soon.

That September deadline represents the time frame by which Rio Tinto, Turquoise Hill, and the Mongolian government need to resolve their differences. Among them are revenue-sharing issues, access to water, past-due taxes, and cost overruns on the project. Last summer, Mongolia initiated an audit of the mine operations to understand how Rio Tinto had exceeded the original budget by some $2 billion.

Despite the hard stance it has taken, Mongolia has also softened elsewhere as it seeks to regain miner and investor confidence in its country as a place to do business. Once referred to as “Minegolia” because of its potential, a boom in commodity prices found the government greedily seeking to renegotiate settled contracts so as to extract greater profits for itself. With the subsequent collapse in commodities, though, the unfavorable business conditions the government erected left it with a dearth of investment. Direct foreign investment was cut in half last year and was down another 65% in the first quarter of 2014.

The government’s deputy minister of economic development admitted it went off the rails a bit, telling the Financial Times, “Mongolia has learnt a good lesson … the important thing for us is to create good jobs and good revenues.” Oyu Tolgoi is the straw that stirs the mining drink in Mongolia, and is seen as the barometer for whether the government is serious about returning to investors’ good graces.

That bodes well for getting the copper and gold project back on track, but doesn’t stand in the way of Rio Tinto’s needs to continue cutting costs. Those weakened commodity prices continue to play havoc with the miner’s performance; until a consensus is reached, Oyu Tolgoi will need to see the fat trimmed just as much if not more so than any of the company’s other projects around the globe.

Opportunities to get wealthy from a single investment don’t come around often, but they do exist, and our chief technology officer believes he’s found one. In this free report, Jeremy Phillips shares the single company that he believes could transform not only your portfolio, but your entire life. To learn the identity of this stock for free and see why Jeremy is putting more than $100,000 of his own money into it, all you have to do is click here now.

Rich Duprey has no position in any stocks mentioned. The Motley Fool has no position in any of the stocks mentioned. Try any of our Foolish newsletter services free for 30 days. We Fools may not all hold the same opinions, but we all believe that considering a diverse range of insights makes us better investors. The Motley Fool has a disclosure policy.