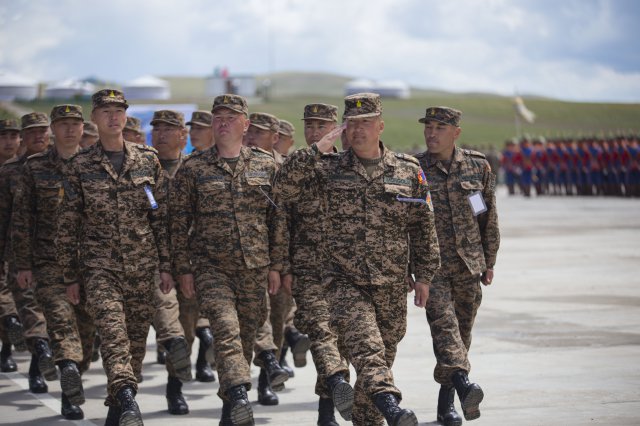 Last week, roughly 1,000 troops from 23 countries began a peacekeeping drill, Exercise Khaan Quest 2014, designed to boost military-to-military interoperability in Mongolia, southwest of Ulanbataar. The exercise is partly focused on peacekeeping operations and also includes a combined training component between U.S. Army Pacific, U.S. Marine Corps Forces Pacific and the Mongolian Armed Forces. It is hosted annually by Mongolia, which has been gradually deepening its security relationship with the United States and is actively pursuing a greater role in the international affairs of Northeast Asia. The exercise will conclude on July 1.

According to a U.S. Army press release, Maj. Gen. B. Bayarmagnai, deputy chief of General Staff, Mongolian Armed Forces, B. Bat-Erdene, member of parliament and Minister of Defense of Mongolia, and Maj. Gen. Thomas H. Katkus, adjutant general of the Alaska National Guard, addressed the troops at an opening ceremony on June 24.

Bayarmagnai noted that the exercise “has significant importance that enables opportunity for international peacekeepers to share their knowledge and experience in peacekeeping operations, execution techniques, learned lessons, and real-life practices among the Soldiers.”

“Training together and sharing our cultures, capabilities, and tactics creates a more robust network of peacekeeping forces capable of responding to the most challenging situations,” noted Katkus. He additionally noted the value of Khaan Quest in deepening military-to-military relations between participants from the 23 countries participating in this year’s iteration: ”In addition to improving the capabilities of the military forces present, Khaan Quest also strengthens personal relationships in both military and civilian sectors.”