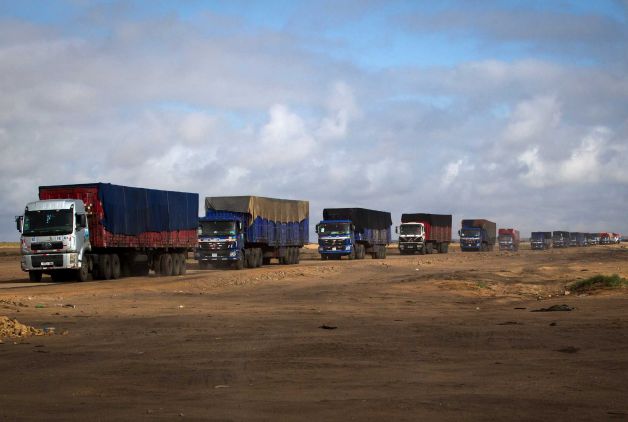 Erdenes Tavan Tolgoi which owns rights to most of the massive Tavan Tolgoi coal deposit – has had to cease production in a financial dispute with contractor Macmahon Holdings.

Reports arose, confirmed by a press release from Australia’s Macmahon Holdings, that all is not well with state-owned Erdenes Tavan Tolgoi (ETT)’s mining arrangements for the enormous Tavan Tolgoi coal deposit close to China’s borders. Macmahon, it may be remembered, owns the Australian contract mining outfit which was contracted to mine ETT’s 1.08 billion tonne eastern section of the Tavan Tolgoi coal project back in 2012 in a five-year deal. Mining operations have been shut down as Macmahon has ceased working due to a dispute with ETT over non-payment of $22 million in progress payments.

The whole Tavan Tolgoi coal deposit is reckoned to contain over 6 billion tonnes of thermal and coking coal – one of the world’s largest known coal deposits. Of its total resource of 6.4 billion tonnes, one quarter is said to be high quality coking coal which commands premium prices. The whole deposit is divided into six sections: Tsankhi, Ukhaa Khudag, Bor tolgoi, Borteeg, and Southwest and Eastern coalfields. The Tsankhi section is the largest part, and is divided into East and West Tsankhi – and it is the East Tsankhi section which Macmahon has been mining for ETT. This is located around 150 km from Rio Tinto’s huge Oyu Tolgoi copper/gold mine, which is itself the subject of a current disagreement between the miner and the Mongolian government over rising costs and taxation.

The East Tsankhi mine is said to comprise about 78% coking coal for which there should be a steady market in China – with the Chinese border only around 240 km from the mine site.

According to Wikipedia, all of Tavan Tolgoi is owned by Erdenes MGL (a government owned company) except for the Ukhaa Khudag section which is mined by the Mongolian Mining Corporation. ETT, which is a subsidiary of Erdenes MGL, has been managing the development of East Tsankhi and thus employed Macmahon to undertake the actual mining operation

Under the original contract terms, Macmahon was due to mine around 3 million tonnes in the first year with production to be doubled in the second year involving additional capex and with an anticipated 15 million tonne/year once all the mine and local transportation infrastructure had been completed.

However ETT has also been in dispute with its primary buyer, Chinalco, with a contract to purchase some 15 million tonne/year. As a result ETT suspended deliveries for around 3 months last year – although this was believed to be in reality because it couldn’t pay its logistics company, while the price it was selling coal to Chinalco at $53/tonne was claimed to be below the cost of mining and delivery (which was put at $61/tonne!

It all seems to be a bit of a tangled thread. Mongolia had seemed to be an excellent destination for foreign mining investment, but the ongoing dispute with Rio, a change in tack on the mining of West Tsankhi, difficulties in dealings with other western miners and explorers, and an opaque mining code have considerably reduced its attractiveness.

In its statement last week, Macmahon advised that “Operations at Tavan Tolgoi have now been suspended by ETT, as part of a range of disagreements between the parties. The parties are engaging in discussions to see whether the matters can be resolved by agreement.”

This latest development will further sour Mongolia’s attractiveness to foreign minerals sector investment, particularly given that ETT is effectively a primarily state-owned company. It has perhaps been a long time coming, we published an article which warned Macmahon that there could be forthcoming payment difficulties back in January 2013, see: Tavan Tolgoi contractor could face possible funding hitch. ETT has obviously struggled to make ends meet, but with operations at east Tsankhi suspended it can’t generate funds to pay Macmahon, but if it is indeed selling its coal at a loss it is difficult to see how it can get out of its financial mess without some major contract renegotiations with both contractor and principal buyer. It all leaves a sour taste.