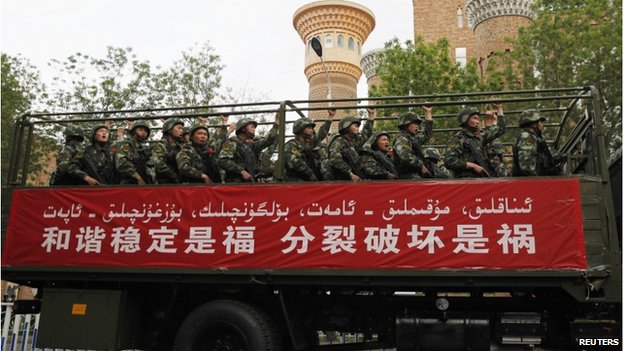 Earlier this week state media reported the incident in Luntai county but gave the death toll as two.

On Thursday a state news portal said 40 “rioters”, six civilians and four police officers were killed. No reason was given for the delay in reporting.

Violence has been escalating in Xinjiang in recent months.

The region in China’s far west is home to the Muslim Uighur minority group. Tensions exist between the Uighur community and the Han Chinese.

The regional government’s news portal, Tianshan, said that blasts occurred around 17:00 on Sunday at two police stations, an outdoor market and a shop entrance.

The “rioters” either blew themselves up or were shot dead by police, it said. Fifty-four civilians were injured and two “rioters” were captured, it said.

Uighurs are ethnically Turkic Muslims and make up about 45% of the region’s population; 40% are Han Chinese

Since then, there has been large-scale immigration of Han Chinese

Uighurs say they fear their traditional culture is being eroded

Why is there tension between China and the Uighurs?

Tianshan named the main suspect as Mamat Tursun, saying he “had been operating as an extremist since 2003″.

Confirming reports about incidents in Xinjiang is difficult, because access is tightly controlled and information flow restricted.

There have been high-profile, organised attacks on civilians in Kunming and Urumqi that have left dozens of people dead.

There have been other incidents of which less is known. In July violence left 96 people dead in Xinjiang’s Yarkant.

State media say it was a “terror attack” but activists say police opened fire on people protesting against a Ramadan crackdown on Muslims.

The latest incident came as China tried Ilham Tohti, a prominent Uighur academic seen outside China as a moderate voice who promoted dialogue between Beijing and the Uighurs.

He has since been jailed for life for separatism, a verdict strongly condemned by the US.