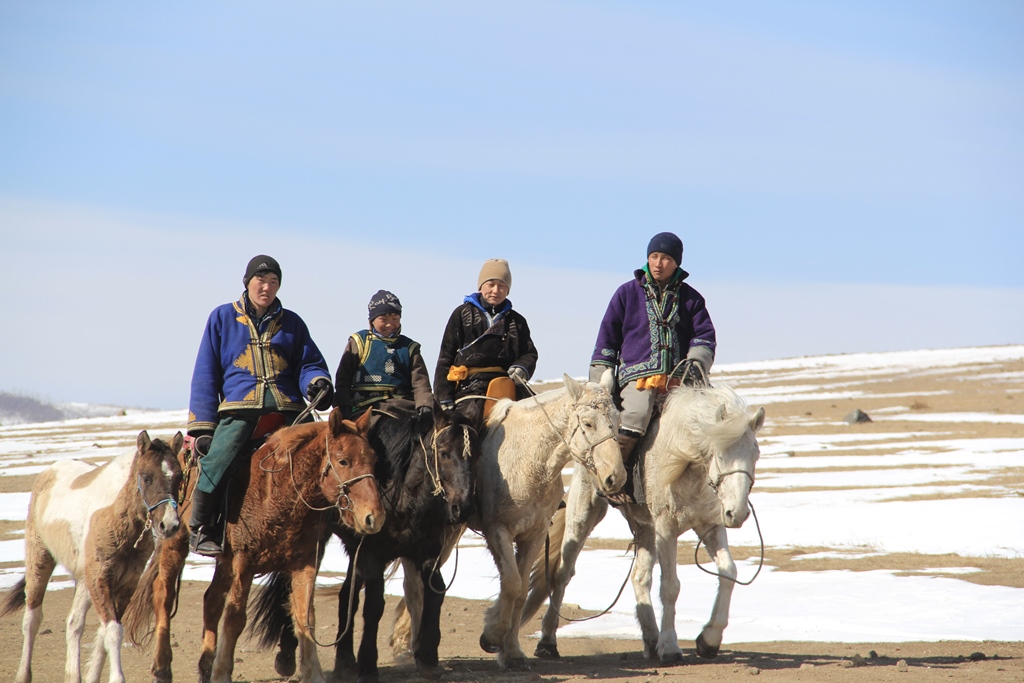 Mongolia’s vast steppe is home to one of the world’s last surviving nomadic cultures. Situated between China and Russia, the Mongolian steppe remains mostly intact, and its nomadic way of life has been largely unchanged for generations. Some herding customs alive today pre-date the era of Genghis Khan. Slowly, however, the steppe’s landscape is changing, as more and more of its nomadic population move to urban areas in search of education, employment, and modern conveniences. Indeed, modernity attracts not only those Mongolians who have moved to the city, but also those who have chosen to continue with their nomadic lifestyle.

Today the nomads who remain on the steppe combine old traditions with new means. They continue their lifestyle as pastoral herders, but many use motorbikes to herd cattle and horses. To move their homes, trucks have taken the place of ox carts. With the growing use of motorbikes and trucks, gas stations now begin to dot the landscape. Solar panels are becoming an addition to the traditional Mongolian home, the ger. The panels are a way for them to gain access to electricity without being confined to one place. The nomads use solar energy to power television sets, and to maintain the use of mobile phones, which, for parents, are the only way to stay in touch with their children attending boarding schools in the city. Mongolian children, whether from urban or rural backgrounds, conventionally study in the city. During the summer, children with rural family backgrounds return to the steppe to help their families maintain the herds, and some come back to live in the steppe after finishing their education.

With the rise of accessible technology, changes in lifestyle are almost inevitable. But these changes also help longstanding traditions thrive. Rather than abandoning their lives on the steppes, Mongolia’s nomads are adapting to modernization in their own way. This culture in transition reaps the conveniences of modern society, while keeping an ancient and fascinating lifestyle alive.