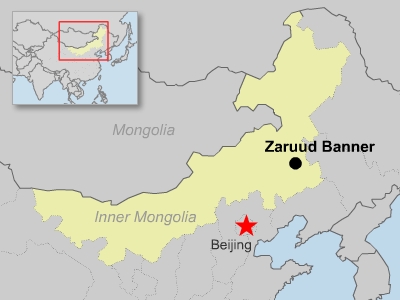 Hundreds of ethnic Mongolian herding families in China’s Inner Mongolia region are calling on the international community for help following their forced eviction from a huge area of their traditional grazing lands, local residents said on Thursday.

Several hundreds of people from Zaruud (in Chinese, Zalute) Banner demonstrated outside the offices of the nearby Tongliao municipal government on Sunday over what they said were forced and violent evictions from their homelands in June.

“After we returned to our grazing lands in June to graze our sheep and cattle, the [Arkund] township government dispatched large numbers of riot police and grasslands management officials,” the herders said in an open letter issued at the same time.

“They pushed over the herders’ yurts and snatched away their livestock, using violence to force 62 herders off their grazing lands,” the letter said, according to copy obtained this week.

“Herders who tried to resist were threatened and beaten up by police,” it said.

“On June 25, they forcibly evicted us,” she said. “They went into the sheep pens and started grabbing the sheep.”

“When we saw our property being snatched away, of course we couldn’t stand it, and we tried to stop them.”

“There were some clashes,” she said. “They behaved like bandits. They didn’t even produce any paperwork.”

The evictions come as part of a widespread “ecological recovery” program under which officials cordon off thousands of acres of valuable grasslands and forbid herders to graze their animals there.

But overseas rights groups say the government’s ongoing land grabs have little to do with environmental responsibility and everything to do with exploiting the land for lucrative strip-mining and other natural resources.

Dagula said the trouble had started in the village five years ago when local officials ordered the herders to stop grazing the grasslands and move away.

“The policy at the time was that the grasslands should be rested for five years, and then we could graze them again,” she said.

“Those five years have now passed, and we have a 30-year contract to graze these lands still in force.”

“They are just using ecological protection as a pretext for evicting us,” she said.

She said herders’ attempts to petition the Tongliao authorities on Sunday had come to nothing, however.

“They said our demands weren’t acceptable,” she said.

One herder, Chenggal, was severely beaten and detained for five days, according to a report paraphrasing the letter on the U.S.-based Mongolian News website.

It said dozens of herders had traveled to municipal government offices in Tongliao last month in a bid to return to their traditional grazing lands.

A second Heyehua resident, Galasang, said local people are also calling on the government for greater compensation for the loss of their livelihoods.

The government has already paid out seven yuan per mu [0.165 acres] for the land, which works out at around U.S. $1,800 per household for the whole five years, residents told RFA.

“All the herders have moved to Jarud banner town, where the government finds a job for one person per household,” he said.

Instead, some local residents said they had received threatening SMS messages after the petitioning attempt on Sunday.

“If you carry on making trouble, we’ll get the criminal gangs to break your legs,” one message read.

Another said: “We’ll cut out your tongues!”

Earlier this month, authorities in Huvuut-shar (Xianghuang) Banner agreed to boost subsidies to herding families after some 400 people protested the illegal confiscation of their grazing land.

Ethnic Mongolians, who make up almost 20 percent of Inner Mongolia’s population of 23 million, regularly complain about environmental destruction and unfair development policies in the region.

Clashes between Chinese companies and ethnic Mongolian herders protesting the exploitation of their grasslands are increasingly common in the region, which borders the independent country of Mongolia.

Rights activists say grasslands on which the herding communities depend for a living are constantly being taken over for China’s mining and tourism industries and for national development projects, forcing them to take action to stand up for their rights.