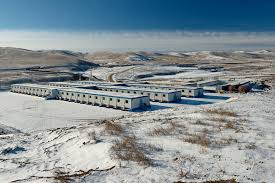 Analysts, on average, had been expecting a loss of 8 cents a share, according to Thomson Reuters I/B/E/S.

The average price realized for Centerra’s gold fell 5 percent to $1,265 per ounce from $1,337 an ounce in the year-prior period.

Centerra’s Kumtor open-pit mine has faced several setbacks since the project started in 1994, including threats of nationalization, riots and more recently a $300 million ecological damages lawsuit. The mine contributes some 10 percent of the impoverished country’s GDP.

Centerra and the government of Kyrgyzstan have been in discussions for more than a year on a deal that would involve the state swapping its 32.7 percent stake in Centerra for half of a joint venture that would control the Kumtor mine.

A recent Ontario court ruling may delay the finalization of an agreement. (Reporting by Susan Taylor in Toronto and Nicole Mordant in Vancouver; Editing by Chris Reese and Richard Chang)