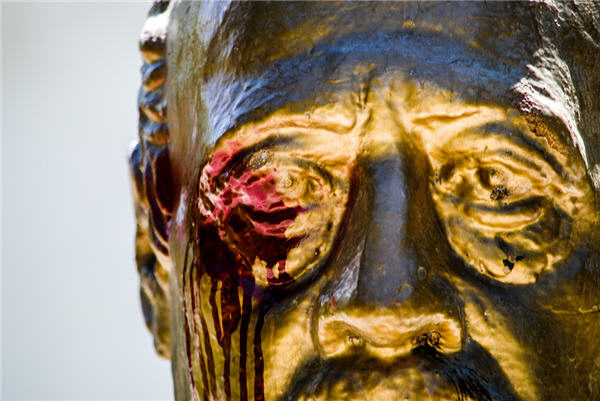 The gold price was battered on Friday by a quadruple shot – the end US economic stimulus, a record-setting surge in equities, further falls in the crude oil price and a rampant dollar.

In lunchtime trade on the Comex division of the New York Mercantile Exchange gold for December delivery was changing hands for $1,167.30 an ounce, down more than $30 or 2.6% on the day.

The coming week will be volatile

Bullion bank Societe Generale SA’s head of commodities research Michael Haigh said the chances are increasing that gold will drop to $1,000 an ounce according to Bloomberg.

Haigh, who correctly forecast gold’s precipitous fall in 2013, singled out the shocking decline in the price of oil to below $80 a barrel and its effect on inflation as “adding more ammunition to the downward pressure on gold.”

Ole Hansen, head of commodity strategy at Saxo Bank in Copenhagen commented that Japan’s unexpected announcement of fresh stimulus that weakened the yen and triggered some stop loss selling of gold “basically pushed gold over the edge as it triggered a major risk-on move.”

The Fed decision to end its quantitative easing and the dollar jumping to a 5-year high against a basket of currencies and particularly the yen today were “more than the market could cope with this week,” he said. The dollar and the gold price usually move in opposite directions.

If this latter figure were reached he says it would complete a 50% retracement of the rally between 2001 and 2011. The coming week will be volatile, he says.

In September chief commodity strategist at investment bank Goldman Sachs, Jeffrey Currie reiterated the house view that the gold price is heading for $1,050 by the end of the year.

Currie argued that gold is essentially hedge against a debasement in the US dollar and rising inflation. Both these factors can no longer support the gold price.