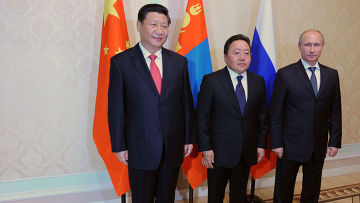 Following up on Vladimir Putin’s September invitation for trilateral talks, Russian, Chinese and Mongolia deputy foreign ministers met in Ulaanbataar for the first-ever Russia-Mongolia-China trilateral consultation. Russian Deputy Foreign Minister Igor Morgulov kicked off the talks by remarking that the three countries share “vast borders, rich historic traditions, firm friendship of peoples, huge potential and vast prospects for practical cooperation, as well as closeness of approaches to international affairs,” according to Russia’s ITAR-TASS news agency. He added that Russia sees China and Mongolia “not only as close neighbors, but also as time-tested and reliable friends.”

According to ITAR-TASS, trilateral talks will likely focus primarily on economic matters, with an supplementary focus on humanitarian and foreign policy issues. Given that the talks are in their initial phase, no major agreements are expected to result from this first trilateral consultation.

The trilateral arrangement carries more meaning for Russia and Mongolia than it does for China. Russia, which faces alienation from Europe on its West, is increasingly looking at Mongolia and China as major economic partners. Earlier this year, Russia signed a major natural gas agreement with China, demonstrating the Kremlin’s eastward economic gaze. Similarly, Russia and Mongolia are working to integrate their national rail networks, increasing connectivity between the two neighbors.

For Mongolia, this trilateral arrangement fits perfectly with its greater international aspirations. As I’ve noted on The Diplomat before, Mongolian President Tsakhiagiin Elbegdorj has almost single-handedly transformed the country’s foreign policy. Under Elbegdorj, Mongolia has grown increasingly activist in the region. Mongolia’s eagerness for this trilateral arrangement should be unsurprising as it remains sandwiched geographically between two behemoth neighbors. In order to realize its international aspirations, Mongolia necessarily needs to coordinate with both China and Russia.

Speaking to this sentiment, Mongolia’s Deputy Foreign Minister Dambyn Gankhuag remarked that “Mongolia is actively cooperating with its neighbors — the Russian Federation and the Chinese People’s Republic — to deepen the existing strategic partnership relations, as well as to give concrete substance to them.”

This first round of trilateral talks will likely focus on the setting up of transit corridors between the three countries — in essence, connecting Russia to China via Mongolia. Specifically, the three countries will look into rail development, highway construction, and a gas pipeline. ITAR-TASS notes that “the Mongolian side is expected to offer Russia to build a section of the so-called western route pipeline not via the Altai mountains but across its steppe territories.”