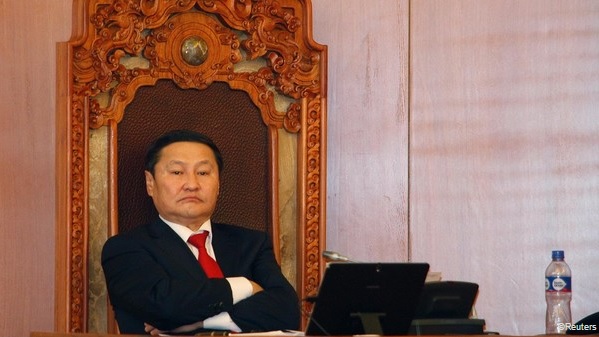 Mr Altankhuyag and the ruling Democratic party have been under siege from the opposition Mongolian People’s Party since a decision in August to consolidate the number of ministries in Mongolia, from 16 to 13.

Seven ministers, including those who oversee mining and foreign affairs, have resigned since then. Mr Altankhuyag lost the no-confidence vote by 55 per cent, after losing the support of members of his own coalition.

Mr Altankhuyag will be temporarily replaced by his deputy, D Terbishdagva, and the rest of the cabinet will stay on until replacements are chosen.

Foreign investment in Mongolia, which is dependent on copper, coal and gold exports, has dropped sharply as the country has been unable to agree with global miner Rio Tinto on the terms of investment in the $5bn next phase of the Oyu Tolgoi mine.

His successor will not have an easy job. For several years Mongolian politicians and governments have committed to spending based on expectations of revenues from Oyu Tolgoi, in which the state holds a 34 per cent stake. Output from the second, underground phase is now unlikely before 2020, according to a report last month from Macquarie analyst Daniel Greenspan.

The Fiscal Stability Law, which takes full effect next year, caps the level of debt and could make it hard to meet budgetary commitments including civil servant salary raises.

Meanwhile, foreign reserves contracted to $1.4bn in August, from a peak of $4.1bn at the end of 2012, and Mongolia has had to expand a bilateral swap facility with China despite being wary of its giant neighbour’s influence. The Mongolian tugrik has weakened to about 1,865 to the dollar, down from 1,780 just six months ago.

Mongolian banks are heavily exposed to mining and related industries, and Moody’s rating agency has a negative outlook on the sector.