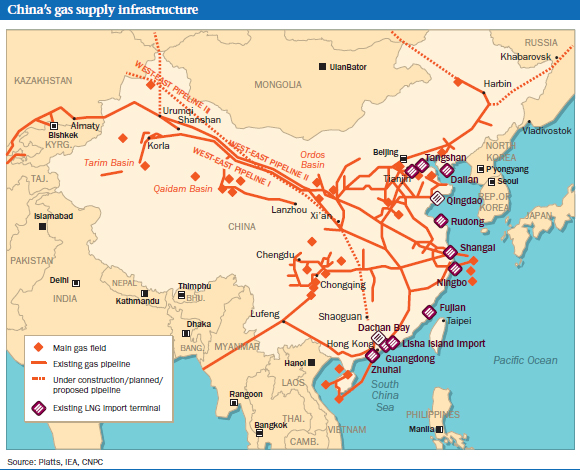 Russia and China have signed a memorandum of understanding to supply gas from western Siberia to China, in the second big gas deal to be sealed this year as President Vladimir Putin builds investment ties with China to counter increasing isolation from the west.

The framework agreement between China National Petroleum Corporation and Russian energy group Gazprom is for an additional 30bn cubic metres of gas per year. It follows a $400bn agreement in May for Russia to sell up to 38bcm of gas per year from eastern Siberia to northeastern China.

The deals represent welcome diplomatic and financial support for Mr Putin, whose regime is under fire from the west over its support for Russian separatists in Ukraine. Energy exports are Russia’s primary source of hard currency and the expectation is that the Chinese would help with the expensive task of building and financing the pipelines.

Russia has long looked to Asia as a potential alternative energy customer to reduce its dependence on Europe. Western Siberia is roughly equidistant from Europe and Asia so, given the right infrastructure, gas produced there could be shipped to whichever market was more attractive.

In a speech earlier this autumn, Keun-Wook Paik, senior research fellow at the Oxford Institute for Energy Studies, said a deal to sell gas from western Siberian through a proposed Altai pipeline to China would be “Putin’s revenge”.

Under the terms of the agreement, CNPC would also buy a 10 per cent stake in Russia’s Vankorneft, a subsidiary of Russian state oil producer Rosneft.

The framework agreement leaves many details to be negotiated.

An initial map released by Gazprom to Russian media indicates the pipeline would cross the narrow and environmentally sensitive border in China’s far western region of Xinjiang. Earlier negotiations had opened the possibility of a longer route through Kazakhstan or Mongolia.

The Kazakh route would have allowed that country to purchase up to a third of the gas, addressing Chinese concerns about finding a market for all the contracted gas. However, some people in Kazakhstan opposed the idea of becoming dependent for energy on their larger neighbour to the north.

Another route, through landlocked Mongolia, was eagerly sought by Ulan Bator. Russia has in the past supported building pipelines to China through Mongolia but China has blocked the idea.