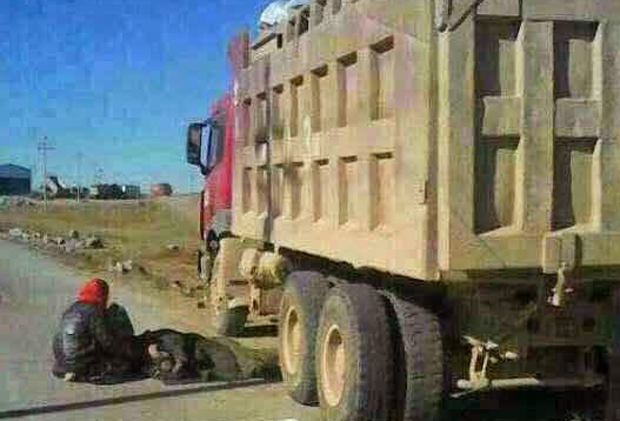 A young ethnic Mongolian herder on horseback died after being run over by a Chinese mining truck in northern China’s Inner Mongolia region this month in the fifth such case in more than three years, a rights group said Friday, amid a clampdown on information on the incident.

Enhebatu Togochog, director of the New York-based Southern Mongolian Human Rights Information Center (SMHRIC), said calls placed to the herder’s father and other relatives, as well as to the local hospital where his body was taken, went unanswered.

He said local authorities were likely preventing them from speaking about the incident.

“Local authorities are very quick in response to sensitive cases, and they block everything and threaten family members” of victims so they don’t talk about such incidents, he told RFA.

Togochog said he not been able to obtain information from the mining trucking company, although local authorities provided a statement saying that the driver was being held at a detention center in the local banner—the administrative equivalent of a county.

A statement released by SMHRIC quoted a herdsman from Sarauutul Gachaa named Bayaraa, who uses one name as do many Mongolians, as saying that authorities had clamped down on the flow of information in the area after the incident.

“Surveillance is tight here, and no one is allowed to talk about this case online,” he said. “Even phone calls from us to the victim’s family members and relatives appear to be blocked.”

Abag Banner’s propaganda department issued a statement calling the incident a “traffic accident in which someone died in a place 184 meters (604 feet) from the cement road running from the Jin Di mining zone to its floatation mill,” SMHRIC said.

“The driver involved in the case remains in detention in the Abag Banner Public Security Bureau on the crime of a traffic accident,” it said, adding that authorities would “handle the case in a fair and open manner in accordance with laws.”

Ayungaa’s horse lies under the truck that ran over it in Abag Banner in western Inner Mongolia’s Shiliin-gol League, Nov. 8, 2014.Brutal attacks

Inner Mongolia has seen a growing number of conflicts between herdsmen and Chinese companies in the last few years, as authorities in the country’s largest coal-producing region open up more mines in a bid to create an energy base.

Ethnic minority Mongolians accuse majority Han Chinese of chipping away at their rights and livelihoods by taking over the grasslands for mining projects, with truckers recklessly mowing down fences—and in some cases herders and their livestock—by driving through them to avoid bumpy roads.

A brutal May 2011 incident in which a truck hauling coal ran over a herder named Mergen as he tried to defend his grazing land from a convoy of Chinese mining vehicles, sparked several demonstrations and protests by other herders and students around the region.

In the biggest protest the region had seen in 20 years, they demanded justice and called for the protection of grazing lands and herders’ rights.

In that incident, driver Li Lindong was found guilty of homicide and executed for knocking down Mergen and dragging his body for more than 100 meters (330 feet) before he died, while his colleague, Lu Xiandong, who was beside him in the truck’s cab, was sentenced to life in prison.

Five months after the protest, a herder named Zorigt was killed in Uushin (Uxin) Banner in Ordos municipality when he tried to overtake a truck on his motorcycle to protect his land from Chinese oil and gas transport vehicles that drove roughshod through grazing areas and killed livestock.

In July 2013, a herder from Ongniud (Wengniute) Banner in Ulaanhad municipality committed suicide after stabbing a Chinese official who was attempting to confiscate his livestock.

In August that same year, a herder named Bayanbaatar from Uushin Banner was beaten to death by Chinese railway workers while defending his grazing land.

Mongolians had posted comments online about incidents in 2011 and 2012, but authorities immediately removed them, Togochog said.

“After that we never received any information about how drivers [involved in subsequent cases] were handled—if they were charged with a crime,” he said, noting that mining companies have financial and other ties to Chinese authorities.

“So in many cases, they can get away with it,” he said.