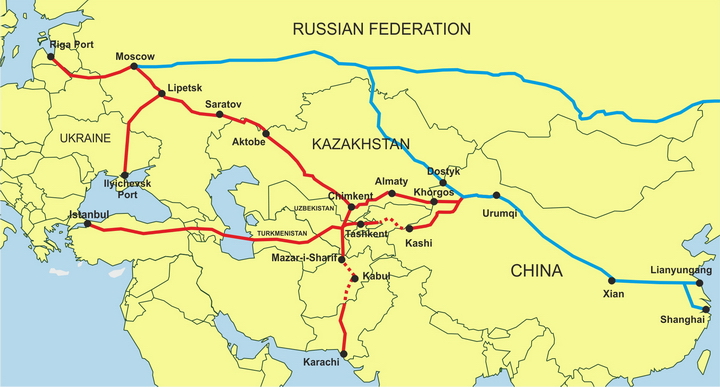 The train named Yixinou arrived in Madrid on December 9 covering 13,052 km – a distance longer than the expanse that separates North Pole from the South.

The train from the Chinese city of Yiwu to Madrid, covering a record breaking journey of 13,052 kilometers has arrived in the Spanish capital, signaling that Chinese President Xi Jinping’s dream of establishing an economic belt along the Silk Road, has inched closer to realisation.

The train named Yixinou arrived in Madrid on December 9, covering a distance longer than the expanse that separates North Pole from the South.

Its 30 containers weighing 1,400 tonnes included a cargo, mainly of toys, stationery and other items, which arrived well in time for Christmas sales in Europe. The train is likely to return with carriages packed with wine, cured ham, and olive oil, ahead of the Chinese New Year celebrations in February.

On return, Chinese planners will anlalyse the commercial viability of the trip, which has several positive attributes. The train’s low carbon footprint of 44 tonnes of CO2 is 62 per cent lower than what a road journey along this route would have encountered. But the mammoth train journey also had to face some difficulties—the engine had to be changed every 800 kilometers, along with the crew with each country that the train passed en route. Then adjustments had to be made at the frontier cities of Dostyk (Kazakhstan), Brest (Belarus) and Irun (Spain) because of differences in railway gauges.

Yet, being a “strategic project”, it is likely that commercialization of this route would be green-signaled in early 2015.

The historic journey—longer than the one undertaken along the 9289 kilometer trans-Siberian railway, translates into reality some elements of President’s Xi’s dream of building growth clusters along the Silk Route. They would be powered by connectivity, energy pipelines, fiber optic cables, which would all feed into the emergence of brand new cities that will complement a network of industrial parks.

In fact, the Yiwu-Madrid route is an extension of either side of the existing railway link between Chongqing in China and Duisburg, a landmark in Germany’s industrial belt.

The train from Chongqing, a major industrial center along the Eurasian corridor, has been known for transiting to Europe vehicle parts and computers, manufactured in its Liangjiang New Area. This is a 1200 square km zone that is home to big brands, such as Hewlett Packard, and Iveco, and is based on Shanghai’s Pudong and Tianjin’s Binhai New Area model. Chongqing has emerged as the growth locomotive for the entire delta area of the Yangtze river, and its integration with the global economy has been spurred by the Chongqing-Duisburg railway link.

Fresh infrastructure development, including new industrial parks are likely to crop up after China, last month, announced that it would set apart a $40 billion base fund for the development of the New Silk Road. Beijing has already decided to fund an industrial park in Kazakhstan’s Aktau port along the Caspian Sea. The Xinjiang based Urumqi Economic and Technological Development Zone (UETDZ), and Xinjiang Sanbao Industry Group have been earmarked to invest in this project. Under its New Silk Road initiative, China is also working with Belarus to set up the Great Stone industrial park. The $5 billion project is meant to cater for 200 hi-tech companies and employ over 120,000 people.

The train from Yiwu to Madrid is run by Trans-Eurasia Logistics, a joint venture between Germany’s Deutsche Bahn AG and the Russian Railways (RZD).

Analysts say that Russia and Germany’s participation in the project is not accidental, for the Chinese are looking at roping in Moscow and Berlin in the development of the New Silk Road. China and Germany are already considering setting up a high-speed rail link between Beijing and Berlin. Observers say that in case a Beijing-Moscow-Berlin partnership along the Silk Road materialises, it is likely to impart a powerful eastward impulse to the changing balance of power in Eurasia.