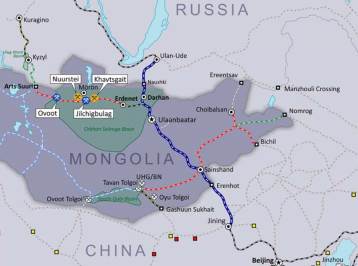 Aspire Mining (ASX:AKM) has received an encouraging report confirming that a Mongolian Blend with between 25% to 50% Ovoot coal is a premium coking coal using Chinese coal classifications.

The blend is considered to be similar or even better than primary coking coals imported from Australia, the U.S., and Canada due to its medium ash, low sulphur and high G value.

This comes as Chinese demand for primary coking coal is predicted to increase due to changes in steel making technologies and depletion of domestic coal reserves combined with continued steel production growth.

The supply gap for primary coking coals in China is expected to peak at 83 million tonnes by 2020.

The report was commissioned to assess the marketability and indicative pricing of the Mongolian Blend in order to complete a Scoping Study to support the development of a regional coal blending facility at the Sainshand Industrial Park.

Sainshand is located 240 kilometres from the Mongolian/Chinese border and provides a strategic location for a coal blending operation.

“The China coal market report received confirms the importance of coking coals at the premium end of the scale for use in China,” managing director David Paull said.

“Demand continues to grow and we are well positioned in our development timeframe for our Ovoot Coking Coal Project to deliver a premium coking coal product into the Chinese market.

“The marketability of the Mongolian Blend is particularly exciting as it confirms the value in establishing a blending operation at the Sainshand Industrial Park to add value to a range of thermal and low caking coals produced in Mongolia at present but with limited economic market outlets.

“Both our Ovoot Project and the potential Blending Facility will benefit from Mongolia’s improving infrastructure landscape with planned railway to be built in the north to service the Ovoot Project, along with the upgrades to the Trans-Mongolian railway and rail border crossings with China.”

The company has received an independent Chinese Coal Market Report it commissioned from a leading coal consultancy firm in China.

This confirmed the marketability of a blend of between 25-50% Aspire’s Ovoot Project indicative coking coal and other Mongolian selected thermal and non-coking coals.

Ovoot coking coal has been recognised as having the ability to upgrade a wide variety of Mongolian coals.

Indicative relative pricing for the Mongolian Blend product was benchmarked on a well-known and referenced Chinese JM coking coal CFR Tangshan Port price and is net of logistics costs to the Mongolia/China border at Zamyn Uud/Erenhot.

Preliminary internal analysis by Aspire, including this price relativity, indicates a positive cashflow blending operation to be based at Sainshand based on current pricing.

The coal consultant also confirmed that continued demand increases from the Chinese steel industry will see China import more coking coal from Mongolia and the seaborne market, with the supply gap expected to grow to 83Mt by 2020 from 51Mt in 2013.

Primary coking coals, such as the Mongolian Blend, are in particular high demand within China, primarily due to the low ratio of these coals in China’s own coal reserves and the growing requirement for higher quality coking coals in the coke industry.

These higher quality coking coals are increasing in demand faster than their lower quality counterparts as China trends towards the use of larger blast furnaces to achieve higher productivity, use of advanced technology and balancing environmental concerns.

In April 2014, Aspire signed a non-binding Memorandum of Understanding to become a key future supplier of coal to the Sainshand Industrial Park, the largest industrial development project in Mongolia.

The agreement also recognised the Ovoot Project as a key supplier of raw materials to the Sainshand Park alongside the Tavan Tolgoi Coal operation.

This was followed in September 2014 by a coal blending concept study, completed by German engineering firm, Tenova Takraf.

Coal can be transported to Sainshand from a number of mines through the expanding Mongolian rail network with Ovoot coking coal being delivered along the Erdenet to Ovoot railway recently included in Mongolia’s Rail Policy, connecting to the Trans-Mongolian Railway at Erdenet.

From Sainshand, the Mongolian Blend can then be transported by the Trans-Mongolian Railway to the Chinese border for sale to Chinese customers.

The Trans-Mongolian Railway is currently undergoing a capacity expansion to 34 million tonnes per annum, with future plans to see this increase further to 100Mtpa.

The Ovoot Coking Coal Project in northwestern Mongolia has a JORC Resource of 255 million tonnes and is the country’s second largest coking coal reserve behind the government-owned Tavan Tolgoi project.

Capital costs to achieve initial production is estimated at US$144 million with operating costs of between US$76 and US$86 per tonnes Free-On Rail at the Chinese border for the first two years of operation, and between US$82 and US S$92/t over the first five years

Current offtake interest in Ovoot coking coal exceeds targeted production with MoUs signed for up to 7.4 million tonnes per annum, or 148% of planned initial production.

It has also signed a non-binding MoU to sell up to 250,000 tonnes of oxidised coal per annum to Zavkhan Power Station about 70 kilometres south of Ovoot.

This provides a potential revenue stream from a product that would otherwise have been considered a waste material.

The MoU includes the construction of transmission infrastructure that will allow the supply of 35 megawatts of power per year to Ovoot.

In November 2014, Aspire signed an engineering, procurement and construction framework agreement with a China Railways Construction Corporation subsidiary for the Erdenet – Ovoot section of the Northern Rail Line in Mongolia.

Given CRCC is a Fortune 500 company this is a strong endorsement and vindication of the project.

The rail line is a key requirement to unlock the value of the Ovoot Coking Coal Project and future earnings from mining and production from the project for Aspire.

The agreement provides the basis for Aspire’s wholly-owned subsidiary Northern Railways LLC and CR20G to negotiate for the award of a fixed price, lump sum turnkey EPC Contract.

Confirmation that an Ovoot coking coal blend ranks as a premium product in China is exciting given the looming supply gap for Primary Coking Coals in China expected to peak at 83mt by 2020 to be fed by Mongolian and seaborne imports.

It also confirms value in Aspire Mining establishing a blending operation at the Sainshand Industrial Park to upgrade a range of thermal and low caking coals produced in Mongolia that have limited economic market outlets.

This follows the recent execution of EPC framework agreement for the key Erdenet to Ovoot Railway that will unlock the value of the Ovoot Coking Coal Project and future earnings from mining and production from the project.

Proactive Investors continues to maintain a 6 – 9 months share price target of $0.125 per share subject to the Northern Rail Line concession being granted for NRL.