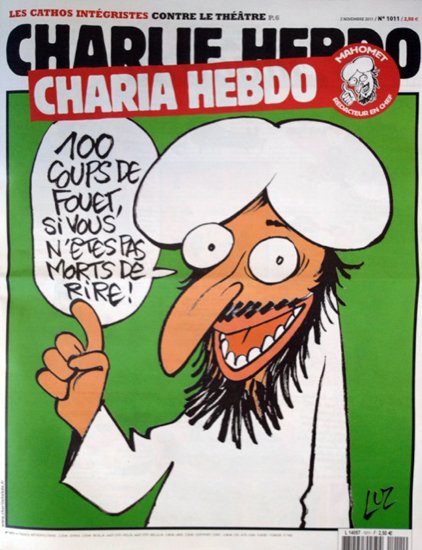 On Jan. 7, 2015, Islamic gunmen opened fire on Charlie Hebdo’s office, killing at least four of France’s most celebrated cartoonists—Charb, Cabu, Wolinski, and Tignous. In all, police said at least 12 people are dead, two of them police officers.

The magazine is no stranger to threats. In 2011, playing off the similar pronunciations of “Charlie” and “Sharia” in French, Charlie Hebdo renamed its Nov. 2nd issue Charia Hebdo, and announced the Prophet Muhammad as a “guest editor” to celebrate the victory of the Tunisian Islamist party Ennahada in the country’s recent elections. The cover showed Muhammad declaring, “100 lashes if you don’t die of laughter!” At 1 a.m. the day the issue appeared, a single Molotov cocktail was thrown into the magazine’s office in the 20th Arrondissement of Paris, destroying all of the property and equipment inside. Charlie Hebdo’s website was also hacked and replaced by the single phrase “No god but Allah.”