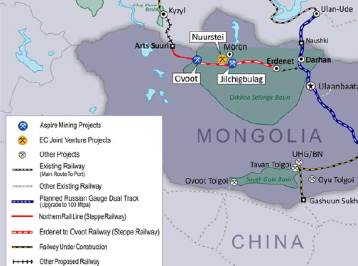 The testwork was carried out on a core sample from a hole drilled during the October 201 exploration program.

“We are very pleased with the results received from this single core hole which indicates a premium hard coking coal is present in this project,” managing director David Paull said.

“Additional work will be required to confirm these results are indicative of the entire project.”

The Ekhgoviin Chuluu Joint Venture, which is owned equally by Aspire and Noble, currently has a 60% interest in the Nuurstei project with a right to move to 90% on the achievement of milestones.

Existing data is currently being reviewed and preparations are underway for a further exploration program this year.

Subject to the results of the 2015 program, the ECJV intends to commence a scoping study for this project based initially on road based transport to the nearest rail head at Erdenet.

The sample from core hole NUDH012 was tested at the ALS Laboratory in Ulaanbaatar.

The Nuurstei Project is located about 10 kilometres to the southwest of Moron, the capital of the Khuvsgul province in northern Mongolia, and 160 kilometres east of Aspire’s wholly-owned Ovoot Coking Coal Project.

Coal produced at the Nuurstei Project could be transported along a recently sealed road that connects to the existing Mongolian rail system at Erdenet.

All holes intersected coal with the largest intersections being:

Data from the exploration program will be used to design a 2015 program to target further near surface resource continuity of coal.

Land purchased at Erdenet by Aspire in 2012 could be used as a coal stockpile and train load-out area.

In addition, the project could also become a user of the Northern Rail Line, a new rail development project earmarked for Northern Mongolia which will link through to export markets.