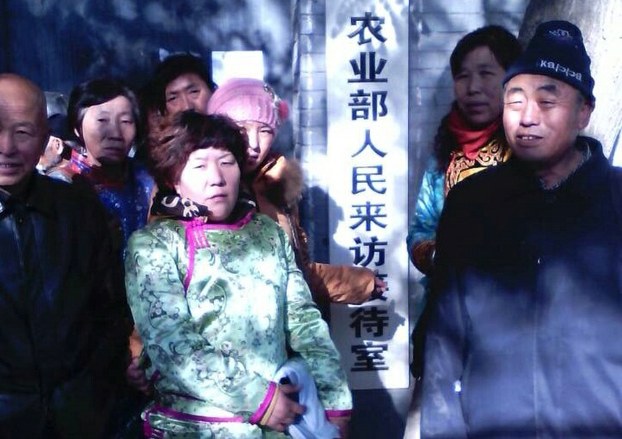 Dozens of herders from China’s Inner Mongolia region converged on Beijing on Tuesday to lodge a complaint with the national government over a land grab they say left them with scant income.

The ethnic Mongolian herders said they were forced in 2011 to move from traditional grazing lands to the north of the regional capital, Hohhot, as the area was taken over by China’s People’s Liberation Army (PLA).

Herding communities in Durbed (in Chinese, Siziwang) Banner told RFA they were promised far larger sums in compensation than they had actually received.

“The Beijing Military Command District [of the PLA] took over our grazing lands starting in 2011, and by June 2012 we had all moved out,” said Altanhuala, a herder from the banner—the administrative equivalent of a county.

Huge tracts of grassland on which ethnic Mongolian herding communities depend for a living are constantly being taken over, forcing them to take action to protect their culture and livelihood, rights groups say.

Ethnic Mongolians, who make up almost 20 percent of Inner Mongolia’s population of 23 million, are increasingly complaining of widespread environmental destruction and unfair development policies in the region.

Clashes between Chinese companies and ethnic Mongolian herders are common in the region, which borders the independent country of Mongolia.

Local herding communities took out 30-year “household responsibility” leases on the grasslands around Durbed between 1988 and 1998, Altanhuala said.

“We have a contract which promises that they will remain unchanged for 30 years,” he said. “We still have more than a dozen years left on the lease.”

“We herders have no education, so all we can get now is 1,000 yuan (U.S. $160) a month as laborers, and those who are a bit older have no income at all,” he said. “They have to rely on social subsistence payments.”

“The elderly have a pension. That’s how we are getting by.”

An official who answered the phone at the Durbed municipal government complaints office declined to comment.

“You’ll have to talk to the [local] government about that,” the official said. “We’re not in charge of that here.”

A second Durbed Banner resident who declined to be named said many local people were injured in clashes when the authorities came to evict them from their land.

“These were forced evictions; they forced us to leave,” the resident said. “We went to [state-run] China Central Television about it … but they refused to report it.”

“We have also taken it to court, where the judge said that we were in the right, but that he would have to rule against us,” he said.

In a bid to make their voices heard at the heart of China’s government, dozens of Durbed residents arrived in Beijing after traveling there on Tuesday in a bid to lodge a formal complaint at the State Council’s “Letters and Visits” complaints bureau.

“We have been complaining for five years, but they never resolve it for us,” Altanhuala said on arriving in Beijing. “Some herders took the local government to court to get the Durbed government to make the information public, but they refused, and said it was a military secret.”

“How did the takeover of our grazing lands turn into a state secret?”

Retired Shandong University professor and veteran rights activist Sun Wenguang said China is currently in the throes of a mass land grab by the government, including the grasslands of Inner Mongolia.

“Everything is owned by the state; the grasslands, forests, rivers, lakes and hills,” Sun said. “A lot of local residents are being violently evicted by the authorities, because the land under their property belongs to the state.”

“This means that government departments and agencies and state-owned enterprises can do what they like with the grasslands,” Sun said.

He added: “There is often corruption involved, so that many of these land disputes turn into thorny problems that can’t be solved.”

But the party regards any popular involvement in the anti-corruption campaign as potentially threatening, and has already sentenced a number of activists to jail for calling on officials to reveal their wealth.

Reported by Yang Fan for RFA’s Mandarin Service, and by Hai Nan for the Cantonese Service. Translated and written in English by Luisetta Mudie.