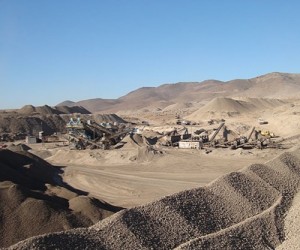 The iron ore price managed a small gain on Thursday with Northern Chinese import prices stabilizing around the $70 a tonne level.

The 62% Fe benchmark import price including freight and insurance at the port of Tianjin tracked by The SteelIndex added $0.20 or 0.3% to $68.00 a tonne.

The price of the steelmaking raw material hit 65.60 a tonne end-December, levels last seen May 2009, after nearly halving during the year due to a flood of new supply hitting the market.

“Rather than requiring this displacement to come from marginal operators with low capex and high opex, the next round of cuts will need to come from more structural mining operations that just 18 months ago could have been making $50/mt or more in cash margin.

“These producers will be reluctant to cut output and it will probably be balance sheet strength rather than cost curve position that ultimately decides who lives and who dies,” Macquarie said in the report.

Industrial commodities are in the midst of a deflationary spiral

After slashing its earlier forecasts Australia-based Macquarie now expects iron ore prices to average $68 a tonne this year falling to $65 a tonne in 2016 before picking up to $70 a tonne the following year.

Moneybeat reports analysts at Citi also cut their forecast by roughly the same margin and now expects 2015 and 2016 price targets of $58 and $62 respectively:

“The industrial commodities are in the midst of a deflationary spiral, driven by lower oil prices, falling fx and efficiency gains,” wrote Citi’s research team. “This is lowering cost curves and support.”