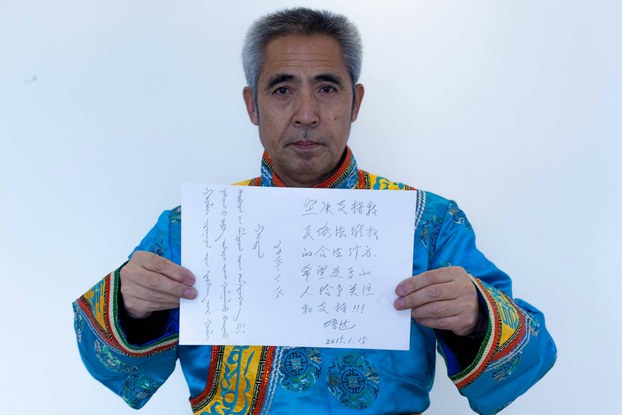 Authorities in Inner Mongolia have frozen the bank account of ethnic Mongolian dissident Hada and are refusing to issue him with an ID card, crucial to freedom of movement and economic activity in China, he and his wife said on Friday.

Veteran rights activist Hada, 60, was released from extrajudicial detention in December, four years after his 15-year jail term for “separatism” and “espionage” ended, with numerous health conditions developed during his sentence.

But he told RFA on Friday that he still isn’t at liberty.

“They are curbing my freedom of movement, and I don’t think they will let me go to [the regional capital],” Hada said. “They told me I would get my ID card in January, but they are now saying it’ll take another two or three months at least.”

Hada was released by Chinese authorities to a police-owned apartment after spending four years in extrajudicial detention at the Jinye Ecological Park in the regional capital Hohhot, where he was being held after serving a 15-year jail term for “separatism” and “espionage.”

But police told him they would only take care of his income and accommodation if he stopped speaking to foreign journalists and promised not to sue the authorities over his treatment, which he has refused to do.

“As everyone knows, a person without an ID card is extremely limited in what they can do,” Hada’s wife Xinna said. “They can’t go out, can’t buy train tickets, can’t buy a SIM card for a cell phone, and can’t get an ATM card or credit card.”

“Our household bank accounts are all frozen right now, and we’d hoped to set up another one using Hada’s ID card,” she said.

“Hada may have got out of detention, but he’s still not free.”

The couple’s grown son Uiles said part of the problem may be that Hada continues to speak out on behalf of ethnic Mongolian herders, who are increasingly in conflict with the government and state-own companies over the exploitation of their traditional grazing lands.

Hada told RFA in an interview last week that he supports recent protests by herders who have reported being displaced from their traditional homes on the grasslands, in spite of having more than a decade left to run on their land leases.

Dozens of herders from Shiliin-gol (in Chinese, Xilinguole) League in the northwest of the region, Sunid Right (Sunite) Banner (administrative equivalent of a county) in the west, and Durbed (Siziwang) Banner in Ulaanchav municipality staged protests this week, New York-based Southern Mongolian Human Rights and Information Center (SMHRIC) said in a statement on its website.

They held up banners, marched, and scuffled with police in separate protests in Shiliin-hot city and in Sunid’s Saihantal township on Tuesday, SMHRIC said.

The protests came as more than 70 Durbed herders continued protests outside central government buildings in Beijing.

“Herders demanded the protection of their legal rights and return to their land from which they were forcibly displaced by the Chinese authorities who planned an expansion of a military base and enforcement of the so-called ecological migration policy,” SMHRIC said.

The “ecological migration” policy seeks to limit overgrazing and stave off the southward creep of the Gobi Desert into China’s grasslands, but herders say desertification isn’t caused by grazing, and that state-run companies use it as a pretext to clear the way for mining and forestry operations.

Hada told RFA on Jan. 14 that the herders have his full support: “The reason I have spent my entire life squatting in a prison was on behalf of the Mongolian herders and on behalf of the grasslands.”

Uiles said the refusal of his ID card was likely linked to this interview.

“No sooner had my father given that interview, than they refused him an ID card,” he said. “Now we find out that his bank account has been frozen.”

“They told them that Hada would be spending Chinese New Year with them, which is a form of kidnapping,” Xinna said, adding that the family had made no such plans.

“We don’t know what they mean by this.”

Overseas Mongolians have been raising funds online to help Hada, who has been threatened with homelessness if he continues to speak out about his treatment in prison, where he has described being tortured and held in solitary confinement for months on end.

A group of ethnic Mongolian students in Japan is campaigning online for donations from around the world for Hada’s family.