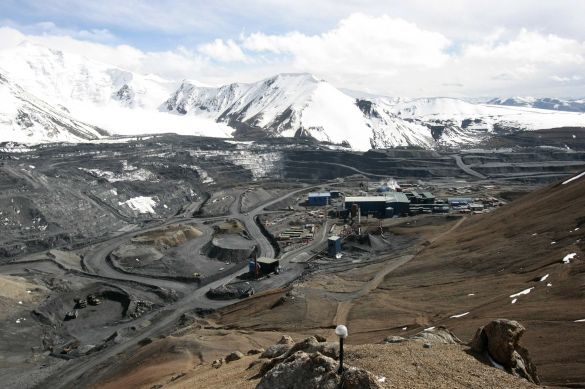 Centerra booked a $111-million, or $0.47 a share goodwill impairment charge on the Kumtor mine, as a result of decreasing the reserves and resources at the mine following negative production reconciliation in 2014, developing a new resource model for the Kumtor central pit and design changes to the central pit resulting from a new resource model and flattening certain of the pit slopes.

Centerra had been in talks with the Kyrgyz government for more than a year on a deal that would involve the State swapping its 32.7% stake in Centerra for half of a joint venture that would control the gold deposit.

“We are in the process of negotiating the definitive agreements to implement the restructuring as described in the heads of agreement signed on January 18, 2014, and are continuing discussions with the Kyrgyz government in this regard,” president and CEO Ian Atkinson said.

During the fourth quarter, Centerra’s cash, cash equivalents and short-term investments increased by $157.6-million to $562-million from $404.4-million at the end of September. As at December 31, Centerra had drawn $76-million on its $150-million revolving credit facility with EBRD, leaving a balance of $74-million undrawn.

At Boroo, Centerra recorded lower output in the three-month period, as it processed lower feed grades through the mill until it ultimately exhausted its stockpiled ore in early December. Fewer ounces were also recovered from the heap leach operation as the operation transitioned from primary to secondary leaching midway through 2014.

For 2015, Centerra forecast consolidated gold output to be in the range of 480 000 oz to 535 000 oz, excluding any potential output from its Gatsuurt project, also in Mongolia.

The company achieved exploration success at the Oksüt project, in Turkey, where it lifted the compliant measured and indicated resources to about 1.4-million ounces of gold contained in 40-million tonnes at 1.1 g/t gold.

Work on the environmental and social impact assessment was progressing as planned and the company reported that it had held its first public meeting regarding the project in August last year. Work on the full feasibility study was also continuing, which Centerra planned on completing by mid-year.

Meanwhile, Centerra’s Gatsuurt project, 35 km from its operating Boroo mine, has been designated as a ‘mineral deposit of strategic importance’ by the Mongolian Parliament, paving the way for Centerra to move forward within the country’s Water and Forest Law, which was the reason the Gatsuurt project remained under care and maintenance owing to the law prohibiting mining and exploration activities in water basin and forest areas.

Centerra also earlier this month announced that it was forming a 50/50 partnership with explorer Premier Gold Mines to jointly own and develop Premier’s Trans-Canada property, including the 4.87-million-ounce Hardrock gold project, in the Geraldton-Beardmore Greenstone Belt of Ontario.