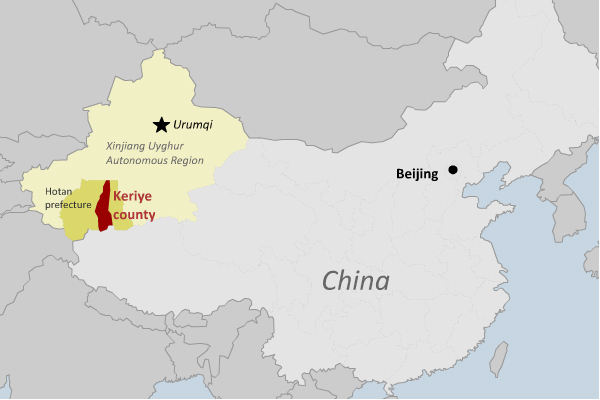 Police in a village in northwestern China’s restive Xinjiang region have confirmed a violent operation in which six Uyghurs accused of being terrorists were killed and two escaped but were later apprehended, after a netizen had reported the incident last week on social media.

During the incident, which occurred on April 19, in Suk village, Lengger township, Keriye county (in Chinese, Yutian) of Hotan (Hetian) prefecture, a state security teamed surrounded a house where Uyghurs they suspected of being terrorists were hiding, sources from the area said. Six people died when an explosion went off inside the house, while two others escaped.

About 99 percent of Lengger township’s population of 16,000 are Uyghurs, Turkic-speaking Muslims frequently described as separatists and terrorists by Chinese officials.

When RFA’s Uyghur Service contacted the police department in Keriye County this week, an officer confirmed the incident by saying, “Are you asking about the incident that occurred in Suk village of Lengger township?…Yes, I know about that, but you have to call a higher authority for details about it.”

Police had blocked all the roads around the house and confiscated the cell phones of witnesses to the incident before the explosion occurred, sources said.

A former village chief, who declined to be named, told RFA that police set up checkpoints on April 19 and 20 at all the intersections in the township and blocked incoming and outgoing traffic so no one could enter or leave.

“At a county meeting, we were informed about the incident in a very brief and unclear manner,” he said. “The authorities said five or six terrorists died in an explosion in the house while they were planning an attack.”

The authorities said the men had bombs on their bodies, but didn’t specify whether they had committed suicide or if police had exploded the devices, he said.

When the villagers asked police how the suspects died, authorities told them it was none of their business because it was a police matter, the former village chief said.

He also said police also told the villagers that they were tightening up security measures in the area.

“Now everybody in township knows that a bloody incident occurred in Suk Village, but I believe that only the people who were at the scene knew what exactly happened,” he said.

‘I had to be vigilant’

Zai Jianjun, a Han Chinese who owns more than 200 mu (33 acres) of land in the township, said he received a call from Zhang Youming , the township’s Communist Party secretary, on April 19 to inform him that six terrorists, including a woman, had been killed in a bloody incident in Suk village, while two others had escaped.

“So I had to be vigilant and take measures to guard against a possible revenge attack,” he told RFA, adding that he locked the doors of his house and gate, put protective coverings over his windows, prepared sticks to defend himself and installed a police alarm phone.

The next day, Zhang visited Zai to check on him and inform him that police had captured the two Uyghurs who escaped in neighboring Shenbebazar township, Zai said.

“He did not provide much detail about the incident either during the first phone call or during his visit the next day,” he said. “He just told me that the terrorists were planning to attack Han Chinese immigrants who managed large-scale plots of land in the township.”

Zai who relocated to Xinjiang from Henan province in 2008, said he was one of five Han Chinese living lived in Bazar village of Lengger township, who collectively cultivated 1,000 mu (165 acres) of farmland and provided jobs to more than 100 Uyghur families.

“That is why some people are happy with us, and some of them are not,” he said. “Even though they don’t say anything to our faces, we can see some unhappiness or anger even—hatred towards us—in their eyes and faces.”

“We are under the strong protection of police and authorities,” he said. “That is why we are here; otherwise, I wouldn’t prefer to live here, even for one day.”

Out of their control

Memtinimin Turghun, a Uyghur farmer who works for Zai Jianjun, told RFA that his neighbors informed him that police had killed the six young suspects and put their bodies in black plastic sacks.

When their families asked for the bodies so they could hold proper funerals and burials, authorities told them it was out of their control and suggested they go to the local police department.

“But they dare not do so out of fear of inviting more trouble,” Turghun said.

He also said Uyghur farmers worked for the Chinese because they make more money than they could cultivating their own extremely small plots of land.

“We have to cooperate with them, because we need money, and they need labor,” he said. “And all the time we are receiving instructions from the police about how we should treat our bosses in terms of not damaging ethnic relations.”

Hotan prefecture in southwestern Xinjiang has been a hotbed of violent stabbing and shooting incidents between ethnic Uyghurs and Chinese security forces, with attacks coming amid a string of assaults and bombings across the region.

In recent years, China has launched a series of “strike hard” campaigns in Xinjiang in the name of fighting separatism, religious extremism and terrorism.

As the targets of these campaigns, Uyghurs complain of pervasive ethnic discrimination, religious repression, and cultural suppression by China’s communist government.