﻿ www.unuudur.com » Modi in Mongolia: Cultural Crossroads in the Far East

Modi in Mongolia: Cultural Crossroads in the Far East 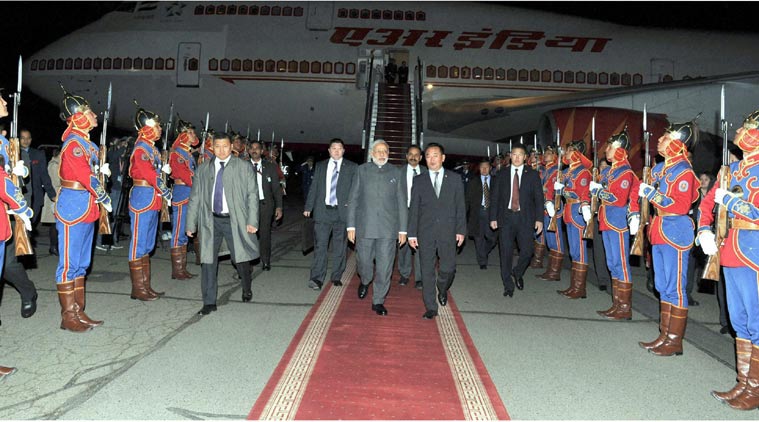 Indian Prime Minister Narendra Modi’s week-long tour of the East has been grabbing headlines, particularly because of his much-hyped first stop in China, which concludes today. On May 18, Modi will head to South Korea, another East Asian country with which New Delhi would like to improve its political standing. But sandwiched in between these two high-profile visits is a rather peculiar one-day stopover – in Mongolia. When Modi lands in the capital of Ulaanbaatar on the 17th, it will be the first ever visit by an Indian prime minister, six decades after the two countries formally established bilateral ties. With a population of barely three million, and landlocked between Russia and China, the choice of Mongolia has considerable strategic significance in the eyes of many Indian foreign policy watchers.

Undoubtedly, the shadow of China will loom large over the trip not just to Ulaanbaatar, but to Seoul as well. Since he came to power a year ago, Modi has devoted considerable attention to foreign policy. In the last 11 months, he has visited 16 countries. New Delhi has, in turn, played host to U.S. President Barack Obama, Chinese President Xi Jinping, and Russian President Vladimir Putin, among others. Closer to home, Modi has made trips to Bhutan, Nepal, Sri Lanka and Myanmar – all part of his attempt to revitalize India’s image in South Asia. As India’s largest neighbor and a country with which New Delhi shares a rather uncomfortable history, China is the elephant in the room. Modi’s stopover in Ulaanbaatar could well be an attempt to improve ties with countries along China’s periphery – in a tit-for-tat move against Beijing, which has been doing much the same with countries neighboring India.

This is not to say that India and Mongolia have never enjoyed comfortable bilateral relations. Ties date back to 1955, when India became the first country outside the Soviet bloc to establish relations with Mongolia (then known as the Mongolian People’s Republic). While bilateral state-level visits have remained confined to the presidents of both countries, India has played an important role in getting Mongolia admission to major international forums, including the United Nations. By way of reciprocation, Ulaanbaatar co-sponsored a 1972 UN resolution with India and Bhutan for the recognition of the newly liberated Bangladesh. Since then, relations between the two countries have been largely focused around increased bilateral cooperation in areas like defense, security, trade, and civilian nuclear energy. Mongolia has some of the world’s richest reserves of coal, petroleum and uranium.

Still, there are limits to relations. For instance, while Mongolia is a potential uranium supplier, India already has existing agreements with many other countries from which it would find it much easier to ship the commodity, rather than from landlocked Mongolia. India and Mongolia did sign a deal to ship uranium to India in 2009 – but Mongolia has yet to follow up on it.

Moreover, Mongolia has had a rather strained history with both its immediate neighbors. Russia and China are bigger and hold all the cards in terms of economic and political power – leaving aside their sheer size. Ulaanbaatar will have no wish to provoke either Moscow or Beijing by actively pursuing policies which either or both giants will find hostile. Indeed, while maintaining its desire to have what it calls “strategic autonomy” from its larger neighbors, Mongolia has worked hard to recalibrate its standing vis-à-vis the international community. It has, for example, taken to multilateralism in a big way. Using what has been termed the “third neighbor” policy, Ulaanbaatar has sought active cooperation with Germany, Europe, Japan and Korea. It holds annual multilateral military exercises (which India is an active part of) on its soil, called the “Khaan Quest,” and it plays a fairly proactive role in the United Nations’ Peacekeeping Operations across the globe. With China wielding obvious economic clout in Mongolian affairs, it is not likely that Ulaanbaatar will look to rock the boat with India.

Modi appears to recognize this. In a shrewd move, he has chosen to elevate Indian ties with Mongolia away from defense and security. Instead, by claiming Mongolia to be India’s “spiritual friend,” and calling for “democracy and Buddhism” to bind the two countries, Modi has placed a shared religious heritage at the center of India’s ties with Mongolia.

Buddhism travelled to Mongolia from India and Tibet at different times in its history, only to emerge as the dominant religion over the last two millennia. Reviving its religious legacy and celebrating its democracy have been the cornerstones of Mongolia’s international image building over the last two decades. Modi’s tweet on May 6 (posted in the Mongolian Cyrillic script as well) plays cleverly to those two precepts. Buddhism has, in fact, been at the center of most of Modi’s trips across South Asia in the last few months. From offering prayers at the Pashupatinath temple in Kathmandu, to meditating at a Buddhist temple in Kyoto and visiting the holy Sri Maha Bodhi tree in Anuradhapura, Sri Lanka, Modi is using the faith as part of a two-pronged outreach to Far Eastern countries. He has already talked about the possibility of restoring ancient Buddhist sites across the subcontinent, and using tourism to dissipate borders via modern transport and infrastructure.

The other prong is the promise of Indian investment in Mongolian economic development. Trade between the two countries fell in 2013 to $35 million, a statistic which Modi will be looking to boost, given that China’s trade with Ulaanbaatar stands at a solid $6.2 billion. The Indian government has cleared the decks for memorandums of understanding to be signed during Modi’s trip to Mongolia in the fields of border security and surveillance, as well as traditional medicine, but there is more that can be done. For example, India has the potential to fulfill Ulaanbaatar’s economic requirements with the use of IT-enabled services in Mongolian mining.

Narayani Basu is a freelance journalist, with a special interest in Chinese foreign policy, East Asian regional security and resource diplomacy in Africa and Antarctica.