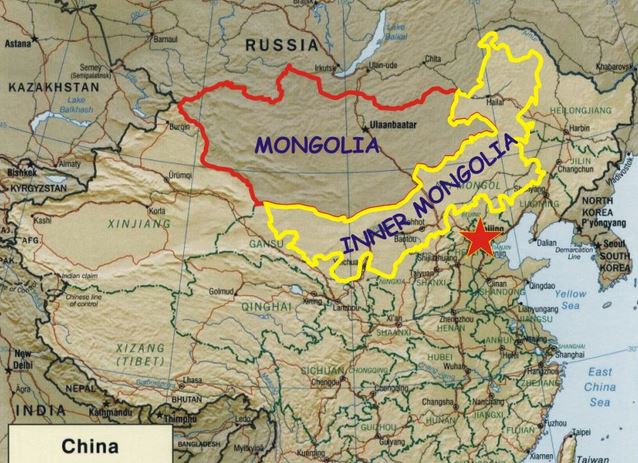 Ethnic Mongolian herders in China’s northern region of Inner Mongolia have hit out a state-run forestry station for using jeeps to drive them away from local grazing lands.

Herders living near the Hanshan Forestry Station in Inner Mongolia’s Ar Horqin banner, a county-like division known as Alu Ke’erqin qi in Chinese, say their grazing lands have been gradually taken over by the forestry company since 2000.

On Monday, a group of herders was chased off their grazing lands by an unidentified man driving a jeep with a local official in the passenger seat, a herder and eyewitness who gave only a single name, Buhe, told RFA.

“There was a herd of cattle and a flock of sheep grazing there on the hillside, belonging to a few of the herders when they came,” Buhe said. “They started to chase them away, in a jeep, mind you, not on foot or on horseback.”

“So we herders went over there to stop them any way we could,” he said. “Initally they wanted to detain us, and eventually they didn’t.”

A second Hanshan herder, Hasigao, said the men in the jeep had knocked over one of the herders who was riding a motorbike, a common form of transport on the vast grasslands.

“They chased us for a while, and one young lad was riding fast on his motorbike, and they crashed into him,” Hasigao said. “The motorbike fell over.”

He said the herders didn’t recognize the driver of the jeep.

“But next to him was sitting an official from the Hanshan Forestry Station,” he said.

Buhe said the herders had been grazing livestock on the same stretch of grassland for generations, until the government designated more than 100 mu as a “National Protection Area” and banned any grazing on the land.

“If they government is taking it back into public ownership, then they should pay us some subsistence or compensation,” Buhe said. “But there has been nothing so far.”

“If we allow our cattle, sheep or horses to wander into the protection area, then they will detain us and fine us,” he said.

He said the herders are trying to pursue their rights, following a 2014 ruling Chinese Communist Party directive on the rule of law.

“We want to protect this piece of land, and protect our culture which was handed down to us from our ancestors,” Buhe said.

He said the dispute has dragged on for some 15 years.

“They have brought in paramilitary police with guns, and they have demolished our yurts, beaten people up and detained more than a dozen people,” Buhe said.

“We just want our livelihoods back; we don’t understand their legal arguments,” he said.

Fellow herder Mishge said local leaders had all visited the area to mediate the dispute, although they had still given no satisfactory explanation to local people.

“The heads of the forestry bureau, the animal husbandry bureau and the police chief all went down there, but we haven’t had a reliable reply yet,” Mishge said.

He said herders complaints had fallen on deaf ears for years.

“The banner government just oppresses the herders,” he said.

The herders’ renewed complaint comes after protests in August 2013 that waves of Chinese immigrants from Sichuan have recently flooded townships in Ar Horqin banner.

Ethnic Mongolians, who make up almost 20 percent of Inner Mongolia’s population of 23 million, increasingly complain of widespread environmental destruction and unfair development policies in the

Clashes between Chinese state-backed mining or forestry companies and herding communities are common in the region, which borders the independent country of Mongolia.

Reported by Yang Fan for RFA’s Mandarin Service. Translated and written in English by Luisetta Mudie.