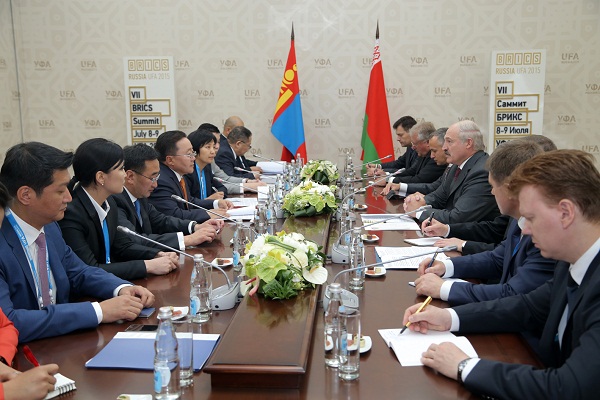 At a bilateral meeting in Ufa, Russia—the site of summits for the Shanghai Cooperation Organization, BRICS, and Eurasian Economic Union this week—Mongolian President Tsakhiagiin Elbegdorj and Belarusian President Alexander Lukashenko expressed their interest in deepening their bilateral ties and expending cooperation. According to reports by Belarusian state media, Lukashenko and Elbegdorj acknowledged similarities between their countries.

“Our people are very similar, they are hardworking and kind. We can sell various things to each other. I think that it would be great to organize expert groups at the level of governments to study various cooperation avenues and even develop concrete projects,” Lukashenko noted, emphasizing a potential increase in trade with Mongolia. According to Belarusian state media, Lukashenko highlighted the sale of BelAZ heavy construction equipment, including dump trucks, from Belarus to Mongolia. He added: “This is a good project, we are ready to develop it. But we must move forward.”

Elbegdorj echoed the statement: “Belarusian tractors, dump trucks and BelAZ vehicles are well known. Some time ago there was a Minsk refrigerator in every family.”

“These are landlocked countries without nuclear weapons. We have transferred to the market economy virtually at the same time, we are located between big states,” he added, highlighting other commonalities between the two countries.

Belarus and Mongolia established diplomatic relations in 1992 and the two countries have expanded their bilateral interactions in recent years. In 2013, Belarusian Prime Minister Mikhail Myasnikovich led a delegation to Ulanbataar to meet with a range of Mongolian officials. According to the Eurasia Daily Monitor, the visit was treated as a major diplomatic event in Mongolia, with considerable press attention. In 2014, Belarus opened an embassy in Mongolia, another sign that the two countries were looking to expand their relationship.

Mongolia’s approach to Belarus is unsurprising given Elbegdorj’s bid to dynamically expand Mongolia’s relations with countries the world over. As I’ve noted previously in The Diplomat, Elbegdorj spearheaded a major expansion of Mongolia’s “third neighbor” policy, forging partnerships with countries beyond Russia and China.

Elbegdorj did meet with Russian President Vladimir Putin and Chinese President Xi Jinping in Ufa as well. Last year, Putin initiated a trilateral process with China and Mongolia, with the intention of expanding infrastructure cooperation between the three neighboring states. “The natural geographic proximity of Mongolia, Russia and China makes it possible for us to implement good long-term projects in infrastructure, the power sector and the mining industry. We have what to discuss with each other. Naturally, we deem it important, expedient and useful to start a permanent dialogue,” he noted.