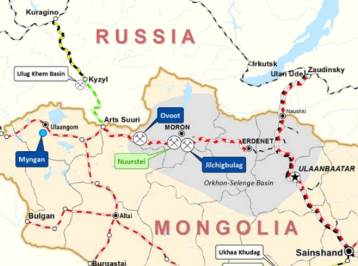 Aspire Mining’s (ASX: AKM) Northern Railways has secured financing from its rail and financial adviser Signum Resources Corporation to carry out the first stage of the Bankable Feasibility Study for the Erdenet to Ovoot Railway.

Northern Railways’ Erdenet-Ovoot railway represents the first stage of a new rail connection linking Mongolia to Russia that provides Aspire with a defined path to market for its Ovoot Coking Coal Project.

Northern Railways is the wholly owned rail infrastructure subsidiary of Aspire Mining in charge of the advancement of a multi-user rail line to be constructed between the town of Erdenet through to Aspire’s Ovoot Coal Project.

The Northern Rail Line will connect the north Mongolian Khuvsgul, Bulgan, and Zavkhan provinces to the existing Trans-Mongolian rail network, which currently ends at Erdenet.

The remaining US$200,000 of the required US$1 million required by China Railway 20 Bureau Group Corporation (CR20G) to complete the first stage of the BFS will be provided by Aspire.

This funding will allow CR20G to mobilise and conduct the first stage Feasibility Study fieldwork before the Mongolian winter in order to maintain the development schedule for the Erdenet to Ovoot Railway.

It will also assist Northern Railways in sourcing the funding for the balance (US$5.5 million) of the Feasibility Study costs and to identify strategic partners and new funding sources for Northern Railways.

The recently granted 30 year Rail Concession for the Erdenet to Ovoot Railway provides for an 18 month period to complete a number of condition precedents including the completion of a Bankable Feasibility Study.

The US$600,000 loan by Signum will have a period of the earlier of two years or the date of receipt of further development funding for a minimum of US$15 million to be provided to Northern Railways.

Interest payable on the loan, totalling US$100,000, will be capitalised until the facility is repaid.

The 547 kilometre Erdenet-Ovoot rail line represents the first stage of a new rail connection linking Mongolia to Russia that is key to establishment of an Economic Corridor through Mongolia.

The total Rail Project construction capital cost is currently estimated at US$1.2 billion.

The recently awarded Rail Concession Agreement provides Northern Railways up to 5 years to construct the railway followed by 30 years of operation after which 100% of the base railway infrastructure will be transferred to the Government of Mongolia.

Erdenet-Ovoot is key to unlocking the value of the Ovoot Project and future earnings from mining and production from the project for Aspire.

Ovoot has a JORC Resource of 255 million tonnes and is the country’s second largest coking coal reserve behind the government-owned Tavan Tolgoi project.

The open access railway could provide other Mongolian resource projects in the area with a path to market.

It could also be used by local agricultural and manufacturing industries and passenger freight, and in time potentially Russian and/or Chinese transit freight.

Aspire has entered a new stage in the development of the Erdenet to Ovoot Railway with Signum Resources’ funding allowing it to kick of the first stage of the Bankable Feasibility Study.

In addition, Signum will also assist Northern Railways in sourcing funding for the rest of the study and identify strategic partners and new funding sources.

The company previously advised that the BFS would take about 9 months to complete while the concession enables Northern Railways to progress financing negotiations with Chinese financial institutions with assistance from CR20G.