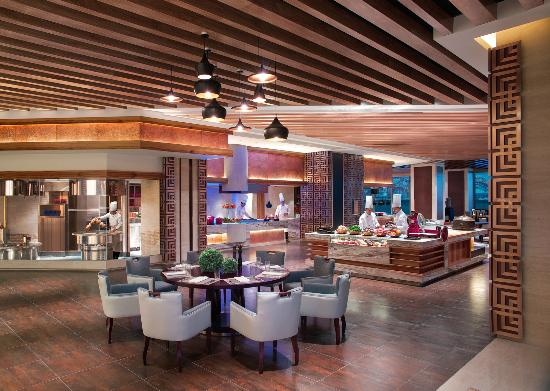 Looking south from the Horizon Club Lounge on the top floor of the new Shangri-La in Ulan Bator, I could see the single track of the trans-Siberian Railway, which loops down from Irkutsk in Russia for the 26-hour journey to the Mongolian capital. In the foreground, was the National Amusement Park — opened in 1969, during Mongolia’s seven decades of communism — with a Ferris wheel, rollercoaster and a Disneyesque castle.

In the far distance lay the forest-covered mountains of the Bogd Khan Uul, which, early in the last century were something of a playground for Mongolia’s religious leader and king, the Bogd Khan. Among the most important Buddhists in Asia, he preferred expensive champagne over the traditional asceticism of his role and was a keen collector of animals, including cheetahs, tigers and an elephant. According to James Palmer’s 2008 book, The Bloody White Baron, which describes the last days of the Bogd Khan’s rule, these creatures lived in the forest, with the elephant minded by Gongor, a 7ft 6in Mongol giant, who was also part of the Bogd Khan’s curious collection.

A century on, the exotica have gone and the wanderings of the forest’s indigenous wildlife are circumscribed by the multi-lane highway leading to the airport. “When I first came to Mongolia 20 years ago to make a movie, I used to jog in this area where the hotel stands. I remember deer grazing in the grassland right here,” said Christopher Giercke, a German-born former film producer staying at the Shangri-La, who now supplies Mongolian cashmere to Hermès. “There is still wildlife in the forests, but it has retreated with the real estate boom. The new Mongolia is a tale of remarkable transformation.”

In July, city real estate prices broke new records, with a penthouse in the Olympic Residences, close to the Shangri-La, selling at $3,500 per square metre (10 years ago, the highest price was $700 per square metre). Of the country’s 3 million inhabitants, 1.4 million now live in Ulan Bator. Some 700,000 are on low incomes, says Lee Cashell, founder of Mongolian Properties, the city’s largest real estate company. The poorest migrants congregate in the “ger district”, named after the felt-lined tents used by Mongolian nomads who have come to the city in search of work. Their homes are pitched close to each other, bringing issues of sanitation and overcrowding.

The new money, however, is reaching for the sky. Shangri-La’s 290-room hotel, which opened in June, is housed in a 95m-high, 21-storey, glass-walled tower. The Hong Kong-based group is earning a reputation for such statement properties, having opened a hotel on the 34th to 52nd floors of London’s Shard last year. Whereas many of the well-known luxury hotel brands concentrate on managing properties for third-party owners, Shangri-La is unusual in that it also owns a large proportion of its hotels. Ritz-Carlton, for example, runs 90 hotels worldwide but does not own any of them; Starwood owns only 33 the 1,249 properties it runs. By contrast, Shangri-La runs 95 hotels, of which 75 are owned or part-owned.

The Ulan Bator project is a joint venture with the MCS Group, Mongolia’s largest real estate and construction group, and has cost close to $600m. A Chinese restaurant opens in October, with a spa to follow by the end of the year. The second phase will include two more towers — one for serviced apartments, the other for offices — to be completed next summer. The development will also include a four-floor mall with an Imax cinema, shops, swimming pool and health club.

I visited late last month, along with the last trickle of summer tourists (in winter, temperatures can drop to minus 40C). Visitor numbers have been growing since the end of communist rule in 1990, but even in the high summer months, tourist numbers are hardly overwhelming. According to the World Bank, the total number of international visitors in 2013 was 418,000, which is a few thousand fewer than visited Trinidad and Tobago, a country which, in terms of area, is 300 times smaller.

The Shangri-La, however, seemed to be doing fine. At Sunday lunchtime, the hotel’s main restaurant, Café Park, was full to bursting — if I hadn’t been staying at the hotel, and therefore assured of a reservation, I would have been unable to get a table. Mongol families with small children and grandparents ate at long tables, grazing long into the afternoon on a fresh buffet comprised of local lamb-filled dumplings, freshly made noodle soups, Indian curries and pastas (the sushi station appeared less popular, but then Mongolia is the second-largest landlocked nation on Earth, and Ulan Bator more than 800 miles from the sea).

There were also parties. The following week, I observed little girls in white heels and party dresses filling the vast lobby. There was a wedding going on, with numerous politicians in attendance. Drivers swooped past in shiny four-by-fours, dropping off their glittering cargo, who swept through the hotel’s double-height revolving doors. Inside, a member of staff endlessly polished the marble floor into a creamy mirror to reflect the lobby’s four round chandeliers — each about 3.5m in diameter.

The bedrooms upstairs are less show-stopping — a little generic, a tad beige perhaps — but just as Shangri-La proved with its London hotel in the Shard, sometimes the point of a room is the view, not the decoration of the walls that surround you. I stayed in a Deluxe Twin room, which I later discovered is the cheapest type (starting at $215 per night) but had assumed was a few grades higher. There was space for an extra bed; the desk was very large indeed. The bathroom had a bath and separate shower which thundered with hot water. The windows soaked me in sunshine and everything worked.

As to service, staff proved consistently willing if inconsistently experienced. A bottle of white wine came to the table warm. Other drinks appeared when the meal was already completed. Waiters serving drinks on the second-floor’s open-air terrace, who were run off their feet, showed little control over the push and pull for tables (the best table is in the corner, looking out towards the rollercoaster). But then Naadam, as this restaurant and bar is called, is the beating heart of the hotel, packed with Mongolia’s demanding, on-the-make businesspeople and glamorous young women. And the hotel is still new, working through its glitches.

Personally I will always tend towards liking hotels with a little more romance or history. Last time I was in the Ulan Bator, 15 years ago, I stayed in what was the capital’s grand dame at the time, the Hotel Ulaanbaatar, built in the Soviet-style in 1961, with brutal architecture and amusingly grumpy, sallow-faced staff. I loved its lack of apology to international tastes, even if it was the city’s first public building with running hot water. How times have changed. The Shangri-La is the proof of it. What this hotel isn’t is just another soulless shell planting itself in an emerging market — though that was my preconception. The way Mongolians have embraced it so completely makes all the difference to its spirit, with the humming lobby — like Claridge’s in London, or the Metropole in Hanoi — a place I wanted to stay all day to people-watch.