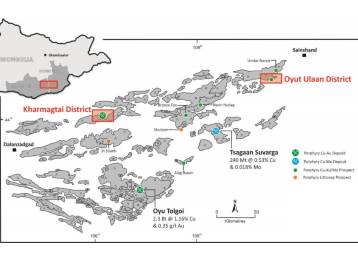 Xanadu Mines (ASX:XAM) has encountered significantly higher grade copper and gold from trenching that surpass average grades of the previously defined mineral resource at Tsagaan Sudal at the Kharmagtai copper-gold project in Mongolia.

This compares with grades of 0.29% copper and 0.23g/t gold and defined 115 million tonnes in the previously announced mineral resource at Tsagaan Sudal.

Assay results from four trenches were designed to test extensions to the resource area.

The surface trenching and diamond drilling provides an extension in strike and width of surface higher-grade copper gold mineralisation at Tsagaan Sudal.

The new trench results at Kharmagtai should extend the current higher grade surface resources at Tsagaan Sudal, contributing to the potential development case at Kharmagtai.

Xanadu’s CEO Dr Andrew Stewart, said: “The surface higher-grade component of the Tsagaan Sudal deposit has been materially extended by over 250 metres to the northwest, where mineralisation remains open.

“This is further evidence that Xanadu is building a significant open-pit metal inventory and with further exploration drilling is likely to result in a very viable deposit given the favourable infrastructure nearby.”

Based on field observations Xanadu said stockwork mineralisation in all trenches contain visible chalcopyrite and only minor copper and iron oxides, as has been observed in previous trenching and drilling at Kharmagtai, where there is no obvious depletion or enrichment of gold and copper in the oxide zone.

Trenching is continuing at Kharmagtai, with the excavator currently testing the extension of the Tsagaan Sudal deposit.

Samples from two more trenches have been dispatched for assaying and results are expected before the end of September.

An update on drilling is expected before the end of September.

Significantly Tsagaan Sudal is the biggest of all the resource at Kharmagtai, however drilling at Tsagaan Sudal is more widely spaced than the other deposits with inconsistent drill directions.

Tsagaan Sudal has received less attention due to lower grades to date, but these results indicate there is a higher grade component to this system. Low cost trenching is changing the understanding and is helping find the higher grade parts (core) and this is evident in increasing gold:copper ratios in the current trenches.