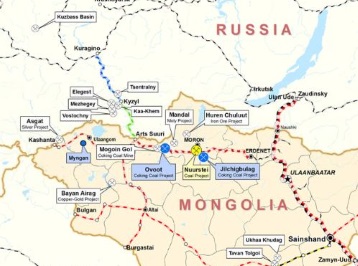 Mongolian metallurgical coal explorer, Aspire Mining (ASX:AKM) has improved the profile of its Nuurstei project as a possible early-production operation as the medium to longer term mining and rail plan continue to unfold.

The latest exploration update from Nuurstei included a 5.6-metre intersection of coal from 34.7 metres and 6.94 metres of coal from 61.2 metres.

Twelve other seams identified in the first of these holes provided a total of 26.39 metres of coal from surface down to 108 metres, illustrating the existence of multiple, albeit relatively thin stacked seams.

Strike length of the correlated seams at the site increased by 0.4 kilometres from to 1.6 kilometres.

A maiden coal resource at Nuurstei is expected to be established by the end of 2015. An exploration target for the project has contemplated a resource of up to 25 million tonnes (at 0.1 metres coal thickness cutoff, rounded), down to 160 metres depth.

By comparison, Ovoot has a total coal resource of 281 million tonnes that will initially drive a production rate of 5 million tonnes per annum, increasing to 10mtpa over 21 years of saleable high-quality coking coal.

The latest drilling at Nuurstei – which lies east of Ovoot along a planned rail connection – helps underscore the project’s potential to be developed as a road based operation, trucking coal to Erdenet, a city en route to the capital of Ulaanbaatar.

This would represent a gradual start-up for the operation before becoming one of the first users of the Erdenet to Ovoot railway once the first section is completed by Northern Railways LLC who was awarded the exclusive concession to build and operate the railway in August 2015.

The thick coal packages are suspected to be structurally thickened by reverse faults that have repeated the coal seams.

Drilling has been aimed at collecting coal samples to be sent to laboratories for coal quality analysis. This will provide a representation of coal quality across the deposit.

The Erdenet to Ovoot railway

Nuurstei will also have access to the Erdenet to Ovoot railway within approximately two years of commencement of its construction and thereby become one of the first users of this railway.

This infrastructure represents a section of the Mongolian government planned “Steppe Railway”, which extends the national rail network from Erdenet to Ovoot and onto the Russian border at Arts Suuri.

There are further plans to then link the rail from Arts Suuri to the Trans-Siberian railway at Kyzyl, thereby creating an international rail link connecting Siberia and northern Mongolia with China.

Last month, Aspire received preliminary results from a scoping study indicating there were no technical obstacles to building a rail connection from Ovoot to the Russian city of Kyzyl.

This rail connection provides the remaining link to create the new Steppe Railway trade connection between China and Russia through Mongolia.

This followed immediately on the execution of a concession agreement allowing Aspire subsidiary Northern Railways 18 months to complete a number of conditions precedent required to commence construction of its 547-kilometre link.

This work will include a feasibility study, contracting and licencing for the project.

The concession will allow up to five years to construct the railway followed by 30 years of operation after which 100% of the base railway infrastructure will be transferred to the government of Mongolia.

In late August, Aspire secured financing from its rail and financial adviser Signum Resources Corporation to carry out the first stage of the feasibility study for the Erdenet to Ovoot Railway.

Further development of Nuurstei is a good sign for Aspire’s strategy of gradually developing its suite of Mongolian assets, with a small-scale operation allowing for initial production before the major projects take shape.

More upside at Nuurstei is indicated by the fact that basement rock has not been intersected in any of the holes and historical drilling has noted that coal in multiple thin seams continue to be intersected well below the current depth of drilling.

Nuurstei is located only 10 kilometres from the existing Moron town, the capital of the Khusvgul province and sits along the path of the planned Erdenet-Ovoot railway.

While still at an early stage, the planned rail connection between Ovoot to Kyzyl is of strategic value to Aspire Mining given its role as part of the new Steppe Railway trade connection between China and Russia through Mongolia.

Adding value, the Steppe Railway is consistent with Chinese policy to build the Silk Rail Road.