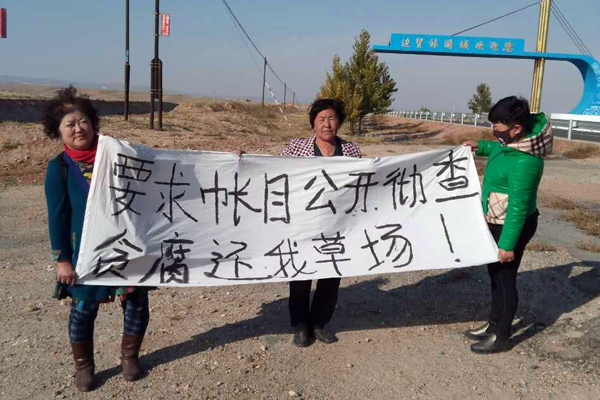 Chinese authorities in the northern region of Inner Mongolia on Thursday detained the grown son of ethnic Mongolian dissident Hada, who remains under house arrest at an apartment in the regional capital.

Uiles was dragged away by state security police as he took a walk with his mother Xinna told RFA.

“My son Uiles came over to bring me winter clothes and to buy a gift for his grandmother,” Xinna said. “As I was taking a walk with my son, the state security police who were following us really crossed the line, by sticking very close to us.”

Xinna said the change in tactics appeared to be linked to the recent appearance in town of a herding community protesting the loss of their grazing lands.

“The last time the herders came to town they did the same,” she said. “So, I asked them what they thought they were doing, walking so close to us, and he told me I was mentally ill.”

“Then they moved in, beating up Uiles pretty badly; they took the opportunity to hit me a good few times as well,” Xinna said. “An officer surnamed Chen who kidnapped me before took my son away.”

She said police had shown no identification or documentation relating to Uiles’ detention.

Hada, 60, who was released from extrajudicial detention last December, four years after his 15-year jail term for “separatism” and “espionage” ended, said he was “furious” about Uiles’ detention.

“I want to express the strongest protest, because we are all citizens, and we should enjoy the rights of citizens,” Hada told RFA. “They acted illegally in detaining him.”

“I call on the agency that detained Uiles to release him immediately and unconditionally,” said Hada, who, like Xinna, is under close 24-hour surveillance by police.

Hada, who suffers from systemic atherosclerosis, liver disease and other conditions he says are a result of years of corporal punishment and abuse in prison, was denied a passport earlier this year after he and Uiles planned to travel overseas so he could seek medical treatment.

In spite of police restrictions forbidding him to engage in political matters, Hada has continued to speak out on behalf of ethnic Mongolian herders, who are increasingly in conflict with the government and state-own companies over the exploitation of their traditional grazing lands.

Elsewhere in the region, a group of herders from Urad Middle Banner in the west of the region gathered outside government buildings in the hope of making their grievances known to regional ruling Chinese Communist Party Secretary Wang Jun, who is touring the area.

Instead, five of them were detained after several dozens of protesters showed up at the banner [county] government offices in Haliut township, holding a banner that read “Open your eyes, investigate corruption, give us back our grasslands!”

Urad herder Baturgaan told RFA on Thursday: “They detained five herders at about 5 p.m.; since then we haven’t been able to get through on their phones.”

Asked what the protest was about, he said: “It was on the issue of the grasslands.”

A second herder said he had been at the scene.

“I am a herder from Urad Middle Banner, and a bunch of herders went to an area to the south of the banner town yesterday in hopes of meeting Wang Jun’s motorcade,” he said.

“But they were taken back by officials and police from our village. … It was over a grasslands dispute,” the herder said.

Residents of the banner’s Sulungaat Gachaa (village) are accusing local officials of misusing their power to sell off some 2,200 mu (146 hectares) of grasslands at a low price, an open letter penned by herders to Wang said.

The dispute has run for several years, but repeated attempts to complain to the authorities have yielded no result, they said.

Herders blame the ongoing exploitation of natural resources by Chinese companies for the spread of grasslands-related protests, as local governments sell off land to investors, often in the mining or forestry sectors, and sometimes in the face of existing “responsibility contracts” held by herding communities for the land.

In China, all land is ultimately owned by the state, so herders have little redress when it comes to safeguarding their own grazing rights, they say.